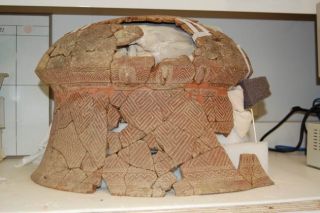 Archaeologists working on the Pacific islands of Vanuatu have found the region's oldest cemetery, and it's filled with a slew of headless bodies.

The peculiar 3,000-year-old skeletons belong to the Lapita people, the earliest known inhabitants of the Pacific Islands. Their DNA could shed light on how the many remote island specks surrounding Vanuatu were colonized, the researchers say.

"Both Vanuatu and Western Polynesia were first settled by the Lapita culture but their populations are somewhat different genetically and this has not yet been explained," said dig leader Matthew Spriggs, an archaeologist with the Australian National University.

The Vanuatu burials--which include mismatching bodies and heads of individuals from different corners of the Pacific Islands--could help explain how everyone eventually ended up where they did, he said.

A total of 70 headless bodies, along with seven skulls and some rare pots, have been found at the site in Vanuatu over several dig seasons. The work was led by Spriggs, Stuart Bedford of the Australian National University and Ralph Regenvanu of the Vanuatu National Museum.

But rather than a ritual sacrifice or some other gruesome custom that might explain the separated heads and bodies, the deceased were all laid to rest initially with their skulls firmly attached, Spriggs said.

The head was believed to be the seat of the soul and so was often dug up after burial when the flesh had rotted away and kept either in skull shrines or in the house as a treasured memento of the person," he told LiveScience.

Curiously, though, none of the skulls belonged to the bodies with which they were buried, tests showed.

"Some curated heads, shiny through handling, had been placed on the chest of one individual some time after his burial--they may have been his descendants," said Spriggs. "Needless to say, he had no head either."

Voyagers from across the sea?

Many skulls and bodies that were found might even have belonged to individuals from islands other than Vanuatu, according to the preliminary DNA testing.

"At present we don't have enough background data to enable us to say where someone came from in the Pacific, only that they didn't come from the island where they were found," Spriggs said. "Currently, 4 of about 18 individuals tested so far show signs of having been born elsewhere."

Those DNA results and more on the way mean that scientists could soon understand just how the Lapita people got to Vanuatu and what route they took from there on to populate islands like Tonga, Samoa and Fiji. Many historians believe they originally made the journey from Southeast Asia, but that is in dispute.

It's a connect-the-dots picture that gets clearer with every new Lapita specimen that is found and tested, Spriggs said.

"We are interested to know whether the DNA (that) we might be able to extract from the skeletons matches common Polynesian DNA patterns or is more like that of the people of Vanuatu today," said Spriggs.