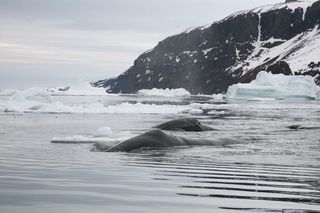 Bowhead whales are rarely seen Arctic dwellers that had been hunted to near-extinction, but new recordings of their songs suggest their population might be bouncing back under the icy seas.

In the Fram Strait — an ice-covered stretch of sea between Greenland and Norway's northernmost islands — only 40 sightings of bowhead whales had been reported in the past four decades. Scientists dropped two underwater microphones in the strait in 2008 to see if they could detect any whale sounds and were surprised by what they listened to a year later.

"We hoped to record a few little grunts and moans," Kate Stafford, lead researcher with the University of Washington, said in a statement. "We were not expecting to get five months of straight singing."

For five wintertime months, the microphone picked up singing nearly every hour and recorded more than 60 unique communications ranging from simple calls to complex songs, the researchers said.

"The song diversity noted here is unprecedented for baleen whales," the researchers wrote in a paper in the journal Endangered Species Research. They added that the size of the song repertoire for the group of whales during this period is "remarkable and more closely approaches that of songbirds than other baleen whales."

Stafford and her team are still investigating why the whales in this area were continually singing, but one possibility is that the strait is a breeding ground. Bowhead whale songs are believed to come from males during mating season. If individual bowhead whales sing the same song their whole lives as some other whale groups do, it would mean more than 60 males had been in the Fram Strait during that five-month period, the researchers said. That could indicate more than 100 whales, including females, in the area, far more than scientists expected.

"If this is a breeding ground, it would be spectacular," Stafford said in a statement. "For such a critically endangered species, it’s really important to know that there’s a reproductively active portion of the population."

The colossal creatures with big ice-breaking skulls can grow to over 60 feet (18 meters) long, weigh 200,000 pounds (90,700 kilograms) and possibly live up to 200 years. Their population, which once may have exceeded 30,000, is thought to be around 10,000. Studying where these whales live could influence conservation efforts, the researchers said.

"As Arctic sea ice declines, there may be some places like this that are important to protect in order to preserve a breeding ground for the bowhead whales," Stafford explained.