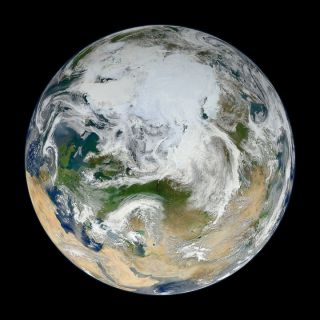 A view of Earth from above created from images snapped by the Suomi-NPP satellite.
(Image: © Image by Norman Kuring, NASA/GSFC/Suomi NPP. Caption by Michael Carlowicz. Suomi NPP is the result of a partnership between NASA, NOAA and the Department of Defense.)

Even planets can get a bad case of tinnitus, according to a new study that explains Earth's mysterious, never-ending hum.

Scientists have long known that earthquakes can make the Earth sing like a bell for days or months. However, in the late 1990s, seismologists discovered the world also constantly vibrates at very low frequencies even when there are no quakes. This so-called microseismic activity is too faint for humans to feel.

Now, researchers say ocean waves are the culprit behind these mysterious tremors.

Many scientists had previously turned to ocean waves to explain our planet's unusual humming. In one theory, scientists proposed the vibrations were generated by huge ocean waves, which can extend all the way down to the seafloor. The waves can shake the Earth as they tumble over seafloor ridges and underwater continental shelves. Another idea suggested colliding ocean waves triggered the tremors. [In Photos: The 10 Strangest Places on Earth]

But neither idea could account for the entire range of vibrations seen on earthquake sensors. The new study combines both of these ideas into one model that accounts for these microseismic signals.

"I think our result is an important step in the transformation of mysterious noise into an understood signal," lead study author Fabrice Ardhuin, an oceanographer at the French Research Institute for Exploitation of the Sea, told Live Science.

Using computer models of the ocean, winds and seafloor, the scientists found that colliding ocean waves could generate seismic waves that take 13 seconds or less to complete one ripple. When it came to slower waves, they found that ocean waves moving over the seafloor could generate seismic waves with a frequency of 13 to 300 seconds. Most of the mystery hum comes from these longer waves. The pressure of these longer ocean waves on the seafloor causes most of the Earth's bell-like ringing, the researchers said.

A better understanding of this hum could help scientists generate better maps of the Earth's interior, Ardhuin said. These seismic waves penetrate deep into the planet's mantle and potentially all the way to Earth's core. This means that analyzing these waves could help yield a more detailed picture of the planet's structure, he said.

The researchers added there could be still more sources of microseismic activity. For instance, perhaps ocean waves traveling along shorelines or traveling down underwater mountains and mid-ocean ridges can generate seismic waves, Ardhuin said.

Ardhuin and his colleagues Lucia Gualtieri and Eléonore Stutzmann at the Paris Institute of Earth Physics detailed their findings in the Feb. 16 issue of the journal Geophysical Research Letters.