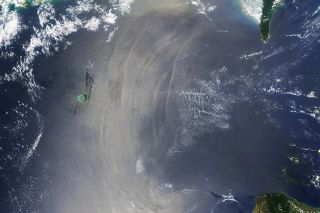 In this satellite image of the Luzon Strait, located between Taiwan and the Philippines, internal waves create alternating rough and smooth regions of the ocean that align with the internal waves' crests. Sunlight reflects the smooth sections, appearing as white arcs, while the rough sections stay dark.
(Image: © MIT/NASA Modis)

Luckily for ships plying the busy waters between Taiwan and the Philippines, these massive waves barely break the surface, though the waves can be a daily event. But for scientists, understanding these underwater "internal waves," which happen throughout the world's oceans, is important for modeling Earth's climate; the waves may push huge volumes of heat, salt and nutrients around the ocean.

"It's an important missing piece of the puzzle in climate modeling," said Thomas Peacock, a mechanical engineer at MIT who is studying internal waves. "Right now, global climate models are not able to capture these processes," Peacock said in a statement.

Now, a new modeling study reveals how the Luzon Strait's internal waves rise from the deep. The model shows that the spacing of two submerged seafloor ridges in the northern Luzon Strait is perfect for generating gigantic internal waves, Peacock and his colleagues reported Nov. 4 in the journal Geophysical Research Letters.

For the study, MIT postdoc Matthieu Mercier built a detailed model of the Luzon Strait seafloor in a 50-foot-diameter (15 meters) wave tank. In the tank, the internal waves formed when tidal currents pushed cold, heavy bottom water over two seafloor ridges, setting up a disturbance called a standing wave. In one key discovery, scientists found that the entire double-ridge system, rather than an isolated feature such as a high mountain on the ridges, was responsible for generating the internal wave.

Researchers performed the tests with water stratified by layers of different salt content, because internal waves can move among the different layers of ocean water.

The ocean itself is divided because colder, saltier water is denser and sinks below hotter, less salty water. Scientists think internal waves, which have been seen in many oceans, can mix up these layers, removing heat from the shallow ocean, for example.

These waves are potentially "the key mechanism for transferring heat from the upper ocean to the depths," Peacock said. The research will also help further understanding of how internal waves appear and disappear, the scientists said.