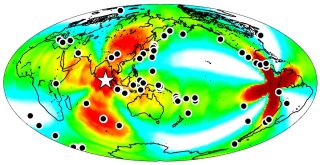 A map of the earthquakes triggered around the globe (shown as black dots) within a week of the April 11, 2012 earthquake off the coast of Sumatra (shown as a white star).
(Image: © Fred Pollitz, USGS)

The biggest earthquakes make the Earth ring like a bell. But do earthquakes that rock the world increase the risk of new temblors?

Not by much, according to two reports presented today (April 19) at the Seismological Society of America's annual meeting in Salt Lake City. In fact, one recent quake near Sumatra, Indonesia, seemed to actually quiet global earthquakes.

But once the triggered quakes stopped, Pollitz was surprised to find a sharp drop in moderate earthquakes for more than three months. Seismic monitors detected no earthquakes bigger than magnitude 6.5 for 95 days. Normally, quakes of this size hit every 10 days, Pollitz said.

"That is quite a rare occurrence," he told OurAmazingPlanet. "The chance of that happening is about 1 in 10,000."

Because it doesn't necessarily take a massive earthquake to trigger new shocks — the 2002 Denali, Alaska, earthquake, a magnitude 7.9, set off quakes throughout the northwestern United States — Pollitz wants to comb through past earthquake records in hopes of finding more quiet periods.

"We need to go back and look at these other earthquakes and see if this is a general pattern of a temporary increase and a longer-term decrease," Pollitz said.

Although the Indian Ocean earthquake may have had a rare calming effect after some time had passed, it did immediately spark a global furry of quakes, as many massive earthquakes often do. Tom Parsons, a USGS geophysicist also at Menlo Park, wants to know how often dangerously large temblors follow strong earthquakes. [Stunning Map Reveals World's Earthquakes Since 1898]

"Every time we have a magnitude 7 or something larger, should the whole rest of the planet be concerned about the increase in hazard?" Parsons told OurAmazingPlanet.

Parsons analyzed hundreds of earthquakes of at least magnitude 7.0 in the past 30 years. Only 24 of the 260 big earthquakes triggered large earthquakes globally.

"That is far less frequent than anticipated," Parsons said. "It's still in the range of random chance, but it's not a zero chance."

These aftershocks were delayed by up to nine hours compared to their smaller magntiude-2 and magntiude-3 counterparts, which may rupture as soon as 45 minutes after the first big quake.