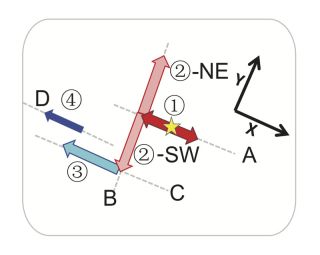 Already a curiosity for its sheer size, the 8.6-magnitude earthquake that shook the seafloor west of the Indonesian island of Sumatra on April 11 appears to have been even weirder than scientists thought.

A new study reveals the quake zigzagged along four faults, three of which are set perpendicular to each other. From above, the layout looks like a city street grid. "We call it an earthquake in a maze," said Lingsen Meng, lead author of the study and a graduate student in seismology at Caltech.

"We were very excited to see this because an earthquake this large, involving this complicated a fault system, does not happen very often," Meng told OurAmazingPlanet. "This may be the only one I will see in my lifetime."

The April Sumatra shakerwas a strike-slip earthquake, in which two parts of the Earth's crust slide past each other horizontally. The quake was not only the 11th largest quakerecorded by seismometers, it's also the largest strike-slip quake on the books. It's also one of the rare big intraplate earthquakes; that is, it happened away from a plate boundary, where two plates of the Earth's crust meet and where most of the world's largest earthquakes occur.

The results of the new study, detailed in tomorrow's (July 20) issue of the journal Science, provide the first in-depth picture of the rupture. The study also offers intriguing clues about the physics of extremely large earthquakes, and the properties of oceanic plates. The observations could shed new light on intraplate quakes and how tectonic plate boundaries evolve.

To better understand how the Earth unzipped during this quake, Meng and his Caltech colleagues applied a technique called back-projection imaging to seismic waves recorded from the Sumatra quake. The imaging process is similar to how our brain uses sound to determine the position of moving objects.

"If you close your eyes in a room and somebody walks past you, your ears measure the tiny delay in the arriving sounds to tell the source of the sound," Meng said. "It's similar to what we're doing, except we use the ground motions recorded by seismic stations."

The dense network of seismometers in Japan and Europe provided enough "ears" to track the slip-sliding faults deep beneath the Indian Ocean.

If that wasn't enough, yet another surprise awaited the researchers as they analyzed the seismic data: The quake took the toughest possible route available to it.

Path of most resistance

Any earthquake opens space on one side of a fault, called extension, and closes space on the other side, called compression. Typically, ruptures that jump from fault to fault head for the extensional side, following the path of least resistance.

"If you compress something, everything is solidified and it's more difficult to break it. On the extensional side, everything is looser and easier to break," Meng explained.

Two of the Sumatra quake's torturous turns were into zones of compression, the researchers found. Meng and his colleagues think it's possible that water deep in the Earth altered rock in the Earth's mantle layer along the faults. This creates low friction, Meng said, and makes it easier for the rift to veer into the compressional field. The Sumatra quake and its aftershock were 15 miles (25 kilometers) deep, down in the mantle where rocks are less brittle. [Video - How Earthquakes Lead To Aftershocks]

Faults at right angles to each other are common in oceanic crust and also occur on continental crust, but researchers have never seen them connected in a very large earthquake, Meng said. Understanding the conditions that caused such a strange quake could help scientists predict whether this mechanism is possible elsewhere on the planet.

"This information is essential for earthquake hazard assessment," Meng said. Some studieshave found fault systems in the middle of continents — closer to where people live — also behave differently than those on plate boundaries.

Seismologist Thorne Lay, who was not involved in the study, said the research has drawbacks because the imaging method can't resolve the earthquake's depth, nor the length each fault slipped. "The analysis here is very nice but is very limited," he said. Lay is one of hundreds of scientists dissecting the quake for what it can reveal about how oceanic plates form new boundaries.

The Sumatra earthquake faults are in a diffuse deformation zone where the giant India-Australia oceanic plate is cleaving in two. "This process of breaking a huge oceanic plate apart is clearly something that's not happening in many other places," said Lay, a professor at the University of California, Santa Cruz. "Our ability to quantify this earthquake offers important lessons about the stresses and processes by which plates break."