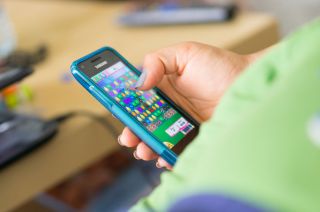 A California man tore a tendon in his thumb after playing a puzzle game on his smartphone too much, according to a new report of the case.

The case is interesting because such injuries are usually quite painful, but the man appeared to not notice any pain while he played, according to the doctors who treated him. The case shows that, in a sense, video games may numb people's pain and contribute to video game addiction, they said.

"We need to be aware that certain video games can act like digital painkillers," said Dr. Andrew Doan, a co-author of the case report and head of addictions research at the Naval Medical Center San Diego. "We have to be very cognizant that that can be abused," Doan said.

The 29-year-old went to the doctor because his left thumb hurt and he was having trouble moving it. He told doctors that he had played the puzzle game "Candy Crush Saga" on his smartphone all day for six to eight weeks. The man had played the game with his left hand while he used his right hand for other things, the report said.

"Playing was a kind of secondary thing, but it was constantly on," the man was quoted as saying in the case report.

After examining the man and performing magnetic resonance imaging (MRI) on his hand, doctors determined that the man had ruptured a tendon involved in moving the thumb, and they said he needed surgery to repair the tendon. [9 Odd Ways Your Tech Devices May Injure You]

But the man said he didn't feel pain while he played the smartphone game. This may be because, when people play video games, they can feel pleasure and excitement that are tied to the release of natural painkillers in the body — the same thing that happens when a person feels a "runner's high," Doan said.

This may lead to reduced perceptions of pain, but it may also play a role in the addictive nature of video games, Doan said.

In this particular case, the man was not addicted to "Candy Crush." Rather, he was playing the game as a way to pass time, Doan said. (The man had recently left the military and was between jobs.) But video game addictions can occur, and they sometimes cause problems in people's relationships, finances and work, Doan said.

People should try to limit gaming to about 30 minutes a day, Doan said. Studies show that about one hour or less of video game play a day can have social and emotional benefits, but too much gaming can have the opposite effect, Doan said.

People who experience problems in their lives as a result of too much video-game play should seek help, and can visit the support group On-Line Gamers Anonymous, Doan said.

It's well-known that smartphones and other devices can cause injuries — the phrase "BlackBerry thumb" refers to repetitive strain injuries that result from the overuse of thumbs to press buttons on mobile devices. And a recent review of Nintendo injuries found that the video games have been linked with a number of injuries over the last three decades, including muscle injuries, and cuts and black eyes linked with playing Nintendo Wii.

But despite the potential for video games to be abused and lead to injuries, their "painkiller" effect might have benefits in the right circumstances, such as for people in pain, the researchers said.

"Although this is only a single case report, research might consider whether video games have a role in clinical pain management and as nonpharmacologic alternatives during uncomfortable or painful medical procedures," the researchers wrote in the April 13 issue of the journal JAMA Internal Medicine. "It may be interesting to ascertain whether various games differ in their ability to reduce the perception of pain," they said.