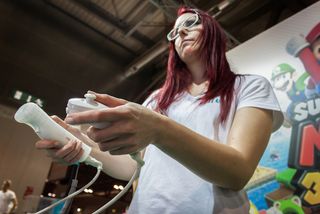 The Nintendo Wii may be on your Christmas list, but all that arm swinging and jumping has been tied to certain injuries, including muscle injuries, and cuts and black eyes, according to a new review study.

Researchers reviewed injuries linked to Nintendo gaming systems over the last 30 years, including injuries that occurred after the Wii was introduced in 2006.

"Overall, a Nintendo is a relatively safe Christmas present," the researchers wrote in the annual Christmas issue of the medical journal BMJ, which often features research that is more light-hearted than the journal's usual fare. "However, those who receive such a gift should not swing the controller too hard, they should be careful about where they play and they should take frequent breaks," the researchers said.

Wii games often require players to swing the motion-sensitive Wii remote while they mimic movements in sports such as boxing and tennis, which can sometimes lead to injuries, the researchers said.

A 2009 study found that the most common injuries people got from playing Wii Sports were hand cuts, bruises and black eyes. These injuries most often occurred in people who were playing Wii Tennis. [9 Odd Ways Your Tech Devices May Injure You]

Injuries to the arm and shoulder muscles, neck and wrist from the game — dubbed "Wiiitis" — have also been reported. In a 2009 case, a woman developed carpal tunnel syndrome (which causes tingling, numbness and pain in the hand and fingers) after playing Wii bowling for 6 to 8 hours a day for 10 days.

There have also been several reports of patients who suffered broken bones, and one patient who needed hernia surgery after exercising with Wii Fit. In 2011, a 7-year-old boy suffered permanent vision loss after he accidentally stuck his left eye while playing Wii Sports.

Despite some reports of serious injuries, most problems related to Nintendo use are mild and uncommon, according to the researchers, who conducted the review at the University of Groningen in the Netherlands.

Earlier versions of the Nintendo console were also linked to certain injuries. In the 90s, traditional wire controllers with buttons were linked with tendinitis of the thumb, hand and wrist, that doctors dubbed "Nintendinitis."

And use of the joystick in Nintendo 64 was linked to palm blisters. Nintendo ultimately gave out protective gloves for use with the Nintendo 64 to prevent such injuries, the researchers said.