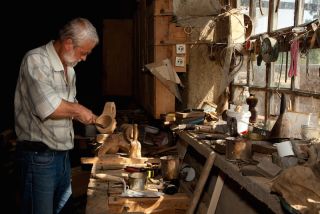 If you’ve ever wanted to try your hand at pottery or knitting, a new study suggests that doing so might be good for your health. Middle-age and older adults who do arts and crafts activities and socialize may reduce their risk of the thinking and memory problems that can lead to dementia, the study found.

Researchers followed 256 people whose average age was 87 at the beginning of the study. Over four years, 121 participants developed mild cognitive impairment, a condition that means having thinking and memory problems, but problems that are not severe enough to affect daily life.

The people who engaged in craft activities such as woodworking or pottery were 45 percent less likely to develop mild cognitive impairment than those who did not participate in such activities, the researchers found.

"People aged 85 and older are the fastest growing population in the U.S.," study author Rosebud O. Roberts, a researcher at the Mayo Clinic in Rochester, Minnesota, told Live Science. "They are also at greatest risk for dementia." [7 Ways to Prevent Alzheimer’s Disease]

The risk of developing mild cognitive impairment was also 55 percent lower among those who socialized in middle age and when they were older, compared with those who did not socialize.

The people who used a computer when they were 85 and older were 53 percent less likely to be diagnosed with mild cognitive impairment than those who did not use a computer.

It is not completely clear why engaging in these activities appears to help lower a person's risk of mild cognitive impairment. However, "it is likely that these activities maintain [the] function of neurons," Roberts said.

The new findings are consistent with the results of previous studies that have also demonstrated the benefits of cognitively stimulating and social activities, Dr. James E. Galvin, a professor of neurology, psychiatry and population health at NYU Langone Medical Center in New York, who was not involved in the study, wrote in a related editorial. Such activities have been shown to lower the rate of cognitive decline, or slow the development of Alzheimer's disease.

Moreover, "while we cannot cure [mild cognitive impairment or Alzheimer's disease], there is increasing evidence that disease risk may be modifiable," Galvin wrote.

There are also other ways a person may be able to influence their risk mild cognitive impairment or Alzheimer's, Galvin wrote. People with high blood pressure, diabetes, cardiovascular disease, high cholesterol levels in the blood, obesity, poor diet and decreased social engagement, may face a higher risk, he wrote.

The study was published today (April 8) in the journal Neurology.