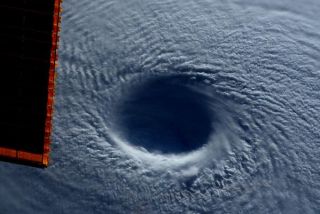 NASA astronaut Terry Virts captured this shot of the eye of Super Typhoon Maysak in the Pacific.
(Image: © Terry Virts/NASA)

The astronauts living and working on the International Space Station are eye to eye with a deadly super typhoon as it heads toward the Philippines.

And from more than 200 miles (320 kilometers) above Earth, the mass of clouds swirling around the dark eye of the monster storm Maysak almost resembles the disk of glowing matter being pulled into a black hole.

"Looking down into the eye - by far the widest one I've seen. It seemed like a black hole from a Sci-Fi movie," NASA astronaut Terry Virts wrote on Twitter. The eye of the storm stretches 17 miles (27 km) across, according to NASA.

Virts and his fellow astronauts have been posting pictures of the typhoon, which is expected to hit the Philippines this weekend if it doesn't change course.

"Commands respect even from space," wrote Samantha Cristoforetti, an Italian astronaut with the European Space Agency who launched into space with Virts in November. (The shot of Maysak that Cristoforetti posted on Twitter might look like it's upside down, but astronauts often feel like they're looking up at Earth from inside the Cupola, a seven-windowed room aboard the space station with the best views.)

Maysak has already been blamed for at least four deaths in Micronesia, according to the Associated Press. Though the storm is expected to weaken over the next few days, it's still packing winds with speeds up to 150 mph (241 km/h), equivalent to those of a Category 4 hurricane, according to the latest advisory from the National Weather Service.

As of 11 a.m. EdT today (1500 GMT), the super typhoon was 223 miles (359 km) northwest of the Micronesian island of Yap. The Joint Typhoon Warning Center predicted that the storm would make landfall on the Philippine island of Central Luzon on Saturday (April 4).