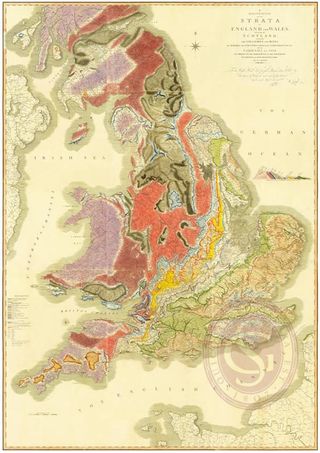 The rediscovered map by William Smith (1769-1839), who classified rocks according to their age and deposition.
(Image: © Courtesy of The Geological Society)

A rare copy of the "map that changed the world" resurfaced last year, giving geologists and historians cause for celebration. Now, on the map's 200th anniversary, The Geological Society of London and its partners are celebrating with gusto, unveiling the restored "lost" map and kicking off a year of events to commemorate the map's creator, William Smith.

Smith (1769-1839), often called "the father of English geology," created the world's first geological map of a country. His masterpiece, a Herculean task, showed the different rock layers of England, Wales and part of Scotland.

"William Smith was far ahead of his time," said John Henry, chairman of the History of Geology group at The Geological Society. "He was the very first to realize that fossils had particular detailed characteristics that he could then tie to certain geological strata." [In Images: How North America Grew As a Continent]

Before Smith, "people just thought fossils were decorations and ornaments," Henry told Live Science. "Nobody thought they were a key to making a sensible order of the geological structure, or using them to predict where economic materials were."

Smith made the map before the advent of trains, so he spent 14 years traveling the United Kingdom on foot and horseback so that he could note each area's geologic structures. When the map finally came out in 1815, his publisher, John Cary, made engraved copper plates that could print the map, and had colorists hand paint each sheet.

The map gave people an idea of what lay beneath their feet. Earlier maps identified rocks by type, but those maps were more like "mineralogical" maps, not geological maps, according to the society.

"When you know where you are in the sequence of rocks, then you have a predictive tool," Henry said. "You can know if you're over a formation that will have [coal] and how deep it is, in an approximate way. Before that, it was just guesswork and trial and error."

It took about 10 years for Smith's map to gain popularity, likely because he had humble beginnings. His father was a blacksmith who passed away while Smith was still a boy.

When Smith trained to become a land surveyor, he picked up geology like a natural, Henry said. "He had this desire to get it all down on [a] map so that other people could understand it," Henry said. But "it was an uphill battle," because The Geological Society, founded in 1807, disliked Smith's working-class background, he said.

However, Smith made powerful friends among wealthy landowners, as he surveyed their land and helped them locate and make use of water and coal. Eventually, a new generation filled The Geological Society, and the organization awarded him the highest prize by calling him the "father of geology" in 1831, Henry said.

Today, there are about 70 surviving original maps from the 1815 printing, Henry said. The society found the "lost" copy in its library; someone had misplaced it 40 to 50 years earlier, he said. A librarian found it rolled in a tube last year, meaning that its colors are well preserved, he added.

"It's very exciting — you don't find things like this very often," Henry said. "We've restored it and brought it out in its full glory."

The rediscovered map is on view for the public at The Geological Society in London.

The Geological Society has planned a yearlong program of events to commemorate the map's 200th birthday. Yesterday (March 23), Sir David Attenborough unveiled a plaque at 15 Buckingham St., London, where Smith lived from 1804 to 1819. The plaque said that Smith "made the first geological map of an entire country — England and Wales — in 1815."