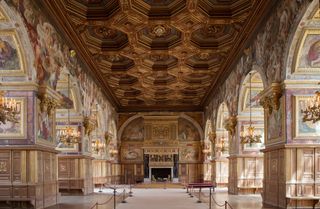 French police are looking for thieves who swiped a Siamese crown and other Asian artifacts from the Château de Fontainebleau this past weekend.

Located some 35 miles (55 kilometers) outside of Paris, the Château de Fontainebleau was the royal residence of French monarchs since the Middle Ages. It has been designated a UNESCO World Heritage Site and is now open to visitors who can tour its sprawling gardens, chapels and galleries.

The art heist took place in Fontainebleau's Chinese Museum, which mostly contains treasures collected by Empress Eugenie, Napoleon III's wife, according to a statement from the office of Fleur Pellerin, France's minister of culture and communications.

One of the stolen art objects was the crown of the King of Siam, a Tibetan mandala and an 18th-century Chinese chimera offered to Napoleon III by the ambassador from Siam (today called Thailand) during an official visit in 1861, French authorities said.

The robbery occurred at around 6 a.m. local time on Sunday (March 1), and the burglars were in and out in seven minutes, according to French officials. The minister of culture and communications said an investigation has been launched.

This isn't the first theft at Fontainebleau. Another 15 objects were stolen from the Napoleon Gallery in 1995, but nine of those artworks have since been recovered, The Telegraph reported.