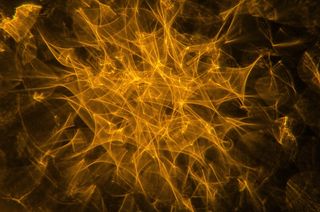 A giant atom smasher has found no trace of a mysterious particle called the dark photon.

The elusive subatomic particle — a heavier, dark twin of an ordinary particle of light — could help explain how dark matter, the shadowy hidden mass in the universe that holds galaxies together, interacts with regular matter.

The new result doesn't rule out the existence of the dark photon. But it does mean physicists must come up with a new explanation for puzzling experimental results that contradict the most dominant theory of physics.

In the reigning theory of subatomic physics, the Standard Model, the universe is made up of a host of subatomic particles that either carry force or form the building blocks of matter. For decades, almost every relevant experiment has confirmed the Standard Model, culminating in the 2012 discovery of the long-sought Higgs boson, a subatomic particle that is thought to explain how other particles get their mass. [5 Elusive Particles That May Lurk in the Universe]

But while almost every experimental result has aligned with predictions, a few have thrown the Standard Model some curveballs.

One such experiment, known as g-2, focused on muons — tiny magnetic particles that spin like tops and are essentially much heavier versions of the electron. Physicists at Brookhaven National Laboratory in Upton, New York, precisely measured the magnetic dipole moment, or the wobbliness, of the muon "tops" as they circled around within a powerful magnetic field. If the world operated according to deterministic physical laws, where the past perfectly determined the future, this wobble, or g, would be exactly 2.

But given that the behavior of subatomic particles is fundamentally uncertain, and accounting for all of the particles predicted by the Standard Model that can nudge and tug the muon, physicists have calculated the true muon wobbliness should be almost, but not quite, 2. The difference between g and 2, or g-2, is called the anomalous magnetic moment.

But between 2001 and 2004, physicists announced they had discovered a discrepancy bigger than the anomalous magnetic moment. This discrepancy wasn't huge, so it could be caused by other factors. But one possibility is that unknown particles were shifting the muon wobble, said Rouven Essig, a physicist at Stony Brook University in New York who was not involved in the current study.

In order for the dark photon to explain this muon g-2 anomaly, it would have to have a certain mass.

To search for this photon, an experiment called the Pioneering High Energy Nuclear Interaction eXperiment (PHENIX) at Brookhaven National Laboratory smashed heavy ions together at nearly the speed of light. They then studied the menagerie of particles produced. One of these particles, a pion, typically decays into two photons.  [See Photos of the World's Largest Atom Smasher (LHC)]

Every now and then, however, a pion could conceivably decay into a photon and a dark photon, which would then decay into an electron and its antimatter partner, the positron. If so, scientists should expect to see an increased number of these electron-positron pairs in the data in a region that corresponds to the mass of the hypothetical dark photon.

The new data from the experiment found no such bump.

That doesn't spell the end for dark photons, however.

"Unfortunately, we don't see any significant dark-photon signal with our current analyzed statistics, but it doesn't mean nonexistence of the dark photon," said Yorito Yamaguchi, a researcher involved in the PHENIX experiment. "It just means the dark photon is unlikely to be the cause for the muon g-2 anomaly."

Instead, the g-2 anomaly could be caused by cosmic rays with an excess of positrons, Yamaguchi said.

Meanwhile, physicists still speculate about dark photons because they could explain dark matter. If they do exist, dark photons would create their own field that interacts with dark matter. These mysterious particles would only interact very weakly with the known forces in the Standard Model, Yamaguchi told Live Science.

"We know dark matter exists," Essig told Live Science. "But the question is, 'How can this dark matter interact with ordinary matter?'"

The results have been accepted for publication in a forthcoming issue of the journal Physical Review C.