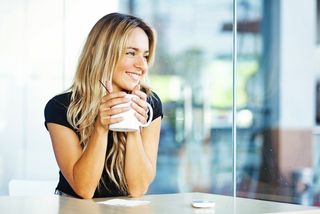 Drinking upward of four cups of coffee a day may lower the risk of developing multiple sclerosis (MS), a debilitating disease that affects the nervous system, researchers say.

The finding isn't without its caveats, and the scientists said they do not recommend that anyone at risk for developing MS go out and start guzzling coffee.

However, the study of nearly 7,000 people in the United States and Sweden  does support observations previously made in mice, and it provides the most compelling evidence to date that caffeine offers protection against numerous neurological disorders. The researchers will present the findings in April at the annual meeting of the American Academy of Neurology.

In people with MS, the body's immune system inexplicably attacks the protective covering around nerve fibers, called myelin. The damage interrupts proper communication between the brain and the rest of the body, resulting in muscle weakness, poor coordination, blurred vision and pain, among other symptoms.

There is no cure for the disorder, and medications reduce symptoms only partially and temporarily. MS is more common in people living at very northern and southern latitudes, suggesting an association with sun exposure and vitamin D levels in certain ethnic groups, but the condition's cause remains unknown.

More than 400,000 Americans and 2.4 million people worldwide have MS, according to the National Multiple Sclerosis Society. Most people experience their first symptoms, often blurred or double vision, between ages 20 and 40.

In 2008, scientists led by Margaret Bynoe at Cornell University reported that mice that were bred to develop an MS-like disease failed to develop the condition when fed high amounts of caffeine. (The mice consumed the equivalent caffeine of four to six cups of coffee.) The researchers' study was published in the Proceedings of the National Academy of Sciences (PNAS).

The scientists hypothesized that caffeine blocked a chemical in the body called adenosine, which would otherwise enable immune cells to enter the central nervous system and destroy myelin. [10 Interesting Facts About Coffee]

In experiments, the mice that were fed caffeine "had reduced numbers of inflammatory immune cells in their central nervous system and, therefore, did not develop MS-like symptoms," said Linda Thompson of the Oklahoma Medical Research Foundation, a co-author on the 2008 PNAS report.

Thompson said a similar biological mechanism might occur in humans to protect against MS.

In the new study, researchers examined two datasets that each included healthy people and MS patients; one of the datasets came from Sweden, and the other came from the United States.

Analysis of both datasets revealed that the people who did not drink coffee had about a 1.5-times increased risk of developing MS compared with those who drank more than 30 ounces, or about four cups, daily.

The scientists could not discern, however, whether coffee helps reduce the severity of symptoms or postpones the relapse of symptoms in people who already have MS.

In MS patient forums, people have discussed the topic of coffee drinking for several years, with some patients reporting benefits, such as clearer thinking, while others report a worsening of their symptoms, such as poor sleep and jittery nerves.

"I think from the MS perspective, there are too few data to support changing coffee intake at this time," said Dr. Ellen Mowry, who led the new study and is an assistant professor of neurology at Johns Hopkins University School of Medicine in Baltimore. "Further research should be done to evaluate the role of coffee, including caffeine, in MS, as it may lead to identifying new targets for treatment."

One limitation of the study is that coffee habits were self-reported and retrospective, with participants asked to recall their coffee drinking patterns from as far back as 10 years, Mowry told Live Science. Yet the fact that the results of the Swedish and U.S. studies were so similar is particularly compelling, she added.

Coffee, most likely due to the caffeine it delivers, has been shown to reduce the risk and severity of other neurological disorders, such as Parkinson's and Alzheimer's diseases, as well as non-neurological conditions like heart disease, type 2 diabetes, liver disease and some cancers.

On the flip side, coffee can cause gastrointestinal problems and increase the intensity and frequency of migraines for many people. Unfiltered coffee can increase your levels of "bad" LDL cholesterol. And the science remains unclear on whether more than a daily cup of coffee increases the risk of miscarriage among pregnant women.

But more to the bottom line, ongoing studies at Harvard School of Public Health following more than 130,000 volunteers have found no increased risk of death from drinking as much as six cups, or 48 ounces, of coffee daily.

So depending on one's personal disposition, there may be far more reasons to increase your coffee drinking instead of kicking the habit.