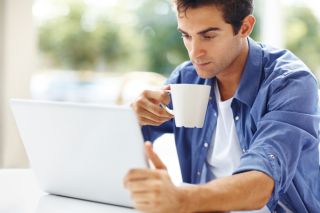 Caffeinated coffee has been found to decrease the risk of Alzheimer's by boosting the levels of a key protein, but caffeine alone doesn't increase the protein, the researchers said, so an unidentified ingredient must be involved.

The mystery compound would react with the caffeine to increase levels of the protein known as GCSF, or granulocyte colony stimulating factor, which is believed to stall the progression of the disease and also has been shown to improve memory in mice with Alzheimer's. GCSF levels are greatly decreased In Alzheimer's patients, the researchers said.

An interaction between the unknown ingredient and caffeine would explain why coffee protects against Alzheimer's while other caffeine-containing drinks don't.

"The exact way that this occurs is not understood. There is a synergistic interaction between caffeine and some mystery component of coffee that provides this beneficial increase in blood GCSF levels," said study author Chuanhai Cao, a neuroscientist at the University of South Florida.

Studies in people have found that daily intake of caffeinated coffee during midlife and in old age decreases the risk of Alzheimer's, the researchers said. Their own previous studies in mice with Alzheimer's have shown that caffeine was likely the ingredient in coffee that provides this protection because it decreased brain production of the abnormal protein beta-amyloid, which is thought to cause the disease.

But the boost in GCSF levels is important, because the researchers also found that higher GCSF levels in the blood were associated with better memory.

The researchers previously reported that four to five cups a day were needed to counteract the brain pathology and memory impairment in Alzheimer's mice. (Decaffeinated coffee was shown to be ineffective.)

"We are not saying that daily moderate coffee consumption will completely protect people from getting Alzheimer's disease," Cao said, but it could reduce the person's risk or delay the disease's onset.

Physical exercise and mental exercise also appear to reduce the risk of dementia, the researchers said.

Pass it on: Coffee contains a mystery chemical that helps prevent Alzheimer's.