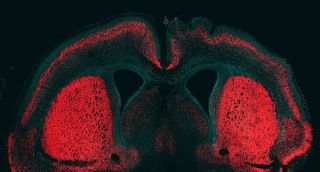 New research suggests that a single gene may be responsible for the large number of neurons found uniquely in the human brain. When this gene was inserted in the brain of a mouse embryo (shown here), it induced the formation of many more neurons (stained red). The extra neurons led to the formation of characteristic convolutions that the human brain uses to pack so much brain tissue into a small space (convolutions shown on the right).
(Image: © Marta Florio and Wieland B. Huttner, Max Planck Institute of Molecular Cell Biology and Genetics)

A single gene may have paved the way for the rise of human intelligence by dramatically increasing the number of brain cells found in a key brain region.

This gene seems to be uniquely human: It is found in modern-day humans, Neanderthals and another branch of extinct humans called Denisovans, but not in chimpanzees.

By allowing the brain region called the neocortex to contain many more neurons, the tiny snippet of DNA may have laid the foundation for the human brain's massive expansion.

"It is so cool that one tiny gene alone may suffice to affect the phenotype of the stem cells, which contributed the most to the expansion of the neocortex," said study lead author Marta Florio, a doctoral candidate in molecular and cellular biology and genetics at the Max Planck Institute of Molecular Cell Biology and Genetics in Dresden, Germany. Still, it's likely this gene is just one of many genetic changes that make human cognition special, Florio said. [The Top 10 Things That Make Humans Special]

The evolution from primitive apes to humans with complex language and culture has taken millions of years. Some 3.8 million ago, Australopithecus afarensis, the species typified by the iconic early human ancestor fossil Lucy, had a brain that was less than 30 cubic inches (500 cubic centimeters) in volume, or about a third the size of the modern human brain. By about 1.8 million years ago, Homo erectus was equipped with a brain that was roughly twice as big as that of Australopithecus. H. erectus also showed evidence of tool and fire use and more complex social groups.

Once anatomically modern humans, and their lost cousins the Neanderthals and Denisovans, arrived on the scene, the brain had expanded to roughly 85 cubic inches (1.4 liters) in volume. Most of this growth occurred in a brain region called the neocortex.

"The neocortex is so interesting because that's the seat of cognitive abilities, which, in a way, make us human — like language and logical thinking," Florio told Live Science.

The neocortex is so large because it is jam-packed with neurons, or brain cells. But what genetic changes ushered in this explosion of neurons?

To understand that question, Florio, along with her thesis advisor, Dr. Wieland Huttner, a neurobiologist also at the Max Planck Institute, were studying one type of neural progenitor cell, a stem cell that divides and then forms brain cells during embryonic development. In mice, these cells divide once, and then make neurons. But in humans, these same types of cells divide many times over before forming a huge number of neurons.

Florio isolated this pool of cells, and then analyzed the genes that were turned on in both mice and humans at a stage of peak brain development. (The researchers looked at this process in both 13-week gestation human fetuses whose tissue had been donated by women after abortions and in mice at 14 days gestation.)

The researchers found that a particular gene, called ARHGAP11B, was turned on and highly activated in the human neural progenitor cells, but wasn't present at all in mouse cells. This tiny snippet of DNA, just 804 letters, or bases, long, was once part of a much longer gene, but somehow this fragment was duplicated and the duplicated fragment was inserted into the human genome.

Then the team inserted and expressed (turned on) this DNA snippet in the brains of mice. Though mice normally have a tiny, smooth neocortex, the mice with the gene insertion grew what looked like larger neocortices; these amped-up brain regions contained loads of neurons and some even began forming the characteristic folds, or convolutions, found in the human brain, a geometry that packs a lot of dense brain tissue into a small amount of space. (The researchers did not check to see if the mice actually got smarter, though that is a potential avenue of future research, Florio said). [The 10 Biggest Mysteries of the Mind]

Building on past work by Evan Eichler and colleagues at the University of Washington, the team also looked at the genomes of several other species, and confirmed that Neanderthals and Denisovans had this gene, but chimpanzees and mice do not.

That suggests the gene emerged soon after humans split off from chimpanzees, and that it paved the way for the rapid expansion of the human brain.

Still, this genetic change is unlikely to fully explain human smarts, Huttner said. Both humans and Neanderthals had large brains, but human's unique intelligence may have more to do with how brain cells form and prune neural networks over time, he said.

Though the gene creates many more neurons to work with, "how those neurons wire up to allow us to fly to the moon, but not the Neanderthal, that is more likely to be a function of genes expressed in neurons," as opposed to genes expressed in progenitor cells, Huttner told Live Science.

The gene was described today (Feb. 26) in the journal Science.