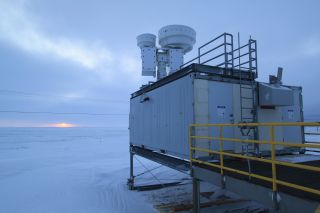 The climate-changing greenhouse effect exists and has been directly measured in the United States, a new study reports.

The results confirm what scientists had already proved through models and laboratory experiments: Pumping carbon dioxide gas into the atmosphere is warming the Earth's surface.

"We're actually measuring the fact that rising carbon dioxide concentrations are leading to the greenhouse effect," said lead study author Dan Feldman, a scientist at the Lawrence Berkeley National Laboratory in California. "This is clear observational evidence that when we add carbon dioxide to the atmosphere, it will push the system to a warmer place."

Since the late 1950s, scientists have documented rising levels of carbon dioxide and other "greenhouse gases" in Earth's atmosphere. Laboratory tests and physics experiments indicated that these gases absorb some of the infrared radiation that Earth emits into space, thereby raising the planet's temperature. This is called the greenhouse effect because it is similar to how a glass greenhouse traps heat, warming the air inside. Put simply, more energy is flowing into the greenhouse than is getting out, a concept that scientists call radiative forcing. [Infographic: Earth's Atmosphere Top to Bottom]

The research team measured radiative forcing on the Earth's surface due to carbon dioxide at two long-running atmospheric research sites owned by the Department of Energy. One is in Oklahoma and the other is near Barrow, Alaska, above the Arctic Circle.

Powerful spectrometers calibrated by the United States Office of Weights and Measures tracked the infrared radiation coming down to the surface, Feldman said. Greenhouse gases in the atmosphere absorb the Earth's infrared energy and then scatter it in all directions, some back downward toward the surface. The instruments can detect the "fingerprint" of carbon dioxide's infrared signal because the molecule emits and absorbs infrared energy at distinctive wavelengths.

In translation: More gas in the atmosphere meant more infrared energy was reflected back at the Earth instead of escaping into space.

"This is another direct piece of evidence that supports that the increase in carbon dioxide is indeed contributing to global warming," said Dave Turner, an atmospheric physicist at the National Severe Storms Laboratory in Oklahoma, who was not involved in the study. "It's a roadmap as to how we can do exactly the same thing for other trace gases."

The scientists ruled out or removed possible warming effects from clouds, weather, water vapor or problems with instrument calibration.

The added radiative forcing was 0.2 watts per square meter per decade, which is about 10 percent of the total increase due to all human activities, according to the Intergovernmental Panel on Climate Change .

"I would hope that even people who raise their eyebrows at this whole field can see there is a really robust observation underlying this," Feldman told Live Science.

The research team is now investigating the contributions to global warming from other greenhouse gases, such as methane.