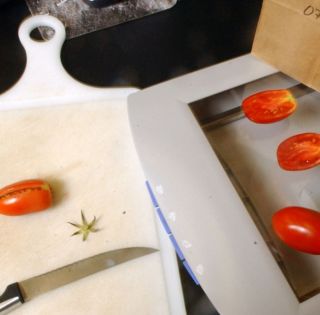 The shapes of various tomato varieties are analyzed in Esther van der Knaap's laboratory by scanning them and measuring them through a unique software program van der Knaap herself developed.
(Image: © Ken Chamberlain, CommTech, The Ohio State University)

Here's a bit of veggie trivia for you: How do you fit a pepper-shaped tomato into a round hole? You turn it into a cherry tomato.

OK. That wasn't a very good joke at all. But it’s completely possible to do. Crop scientists at Ohio State University have cloned a gene that controls the shape of tomatoes — a discovery that could help unravel the mystery behind the huge morphological differences among edible fruits and vegetables as well as provide new insight into mechanisms of plant development.

According to Esther van der Knaap — lead researcher in the NSF-funded study and an assistant professor of horticulture and crop science — the gene, dubbed SUN, is only the second ever found to play a significant role in the elongated shape of various tomato varieties.

One of the most diverse crops in terms of shape and size variations, tomatoes evolved from a very small, round wild ancestor into the wide array of cultivated varieties — some large and segmented, some pear-shaped, some oval, some resembling chili peppers — available through most seed catalogs and for sale in supermarkets.

However, very little is known about the genetic basis for such transformations in tomatoes. And virtually nothing has been discovered about morphological changes in other fruits and vegetables.

"We are trying to understand what kind of genes caused the enormous increase in fruit size and variation in fruit shape as tomatoes were domesticated," van der Knaap pointed out. "Once we know all the genes that were selected during that process, we will be able to piece together how domestication shaped the tomato fruit — and gain a better understanding of what controls the shape of other very diverse crops, such as peppers and the cucumber and squash family."

One of the first pieces in van der Knaap’s fruit-development puzzle is SUN, which takes its name from the "Sun 1642" cultivated variety where it was found — an oval-shaped, roma-type tomato with a pointy end. The gene also turned out to be very common in elongated heirloom varieties, such as the Poblano pepper-like "Howard German" tomato.

"After looking at the entire collection of tomatoes we could find, we noticed that there were some varieties that had very elongated fruit shape," van der Knaap explained. "By genetic analysis, we narrowed down the region of the genome that controls this very elongated fruit shape, and eventually narrowed down that region to a smaller section that we could sequence to find what kind of genes were present at that location.

"In doing that," van der Knaap continued, "we identified one key candidate gene that was turned on at high levels in the tomato varieties carrying the elongated fruit type, while the gene was turned off in round fruit."

Once SUN was identified, the next step involved proving whether this gene was actually responsible for causing changes in fruit shape.

When asked if her lab could make small round cucumbers, van der Knaap answered, "I'm not sure. But they would certainly look nice in a salad."