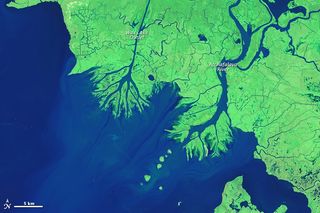 New land is blossoming at the mouths of the Atchafalaya River and the Wax Lake Outlet in Louisiana, bucking the trend of lost ground in this Gulf state.

Recent satellite imagery shows two new deltas protruding into the Gulf of Mexico, one fed by the Atchafalaya and one from the nearby Wax Lake Outlet. Similar images taken in 1984 show nothing but a few disjointed spits of sediment where there are now marshlands.

"We are looking carefully at the Wax Lake and Atchafalaya deltas as models for building new land and preserving some of our coastal marshlands," Harry Roberts, Louisiana State University coastal studies researcher, told NASA's Earth Observatory, which released the images. [7 Ways the Earth Changes in the Blink of an Eye]

Most of Louisiana's coastland is subsiding, with multiple square miles lost per year. There are a number of reasons for the state's sinking trend, from natural processes to lack of sediment coming down the Mississippi River due to dams and levees to extraction of groundwater and oil and gas.

Since the 1950s, however, geologists have noticed a couple of spots in the Atchafalaya Bay that buck this trend. In 1973, specks of land rose above the waterline for the first time. Now, the Atchafalaya delta is growing at about 0.6 square miles (1.6 square kilometers) per year, and the Wax Lake delta is growing at 0.46 square miles (1.2 square km) each year.

In the new satellite imagery, taken by Landsat in October 2014, the Atchafalaya River is visible as a thick tributary on the right, the new delta protruding into the bay. On the left, the thinner and straighter Wax Lake outlet — a man-made channel — empties about 10 miles (16 kilometers) west. Unlike the Atchafalaya, the Wax Lake outlet is not dredged, according to the Earth Observatory, so its delta is more natural and symmetrical in shape than the Atchafalaya delta.

A November 1984 satellite image, also from Landsat, shows the landscape as it was 30 years prior. The beginnings of both deltas are barely visible as accretions of sediment in the bay. The land color is a less vivid green than in the 2014 imagery, because it was taken later in the autumn.

The deltas hint at how to slow the land loss plaguing southern Louisiana, Roberts told the Earth Observatory.

"If we start diverting significant portions of the water and sediment from the main channel of the Mississippi River into adjacent wetlands, lakes and bays — as happens now in Atchafalaya Bay — we'll be taking an important first step toward saving a significant part of Louisiana's coastal plain," he said.