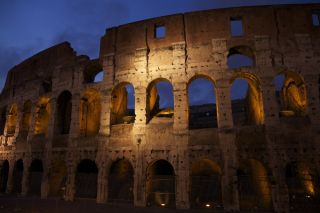 The Colosseum in Rome, one of the subjects of a new NOVA series, was home to bloody spectacles and wild animal fights.
(Image: © Providence Pictures)

How did the Romans release wild animals into their mighty Colosseum? How did the massive Hagia Sophia cathedral in Istanbul withstand centuries of earthquakes? And how did a desert people carve elaborate tombs in rocky cliffs in Jordan?

These are some of the questions that a new NOVA series on the mysteries of ancient buildings seeks to answer. The three-part series, called "Building Wonders of the World," premieres tonight (Feb. 11) at 9 p.m. ET (8 p.m. CT).

"We are contributing to the scholarly and scientific investigation of what the buildings meant to people, and how they actually built them," said series producer Gary Glassman, of Providence Pictures. [In Photos: Amazing Ruins of the Ancient World]

The buildings are like "snapshots in stone," Glassman told Live Science: "They are what the culture at that moment wanted to project."

Death in the Colosseum

Perhaps the most iconic symbol of the Roman Empire, the Colosseum was built in just 10 years from A.D. 70 to A.D. 80, during the reign of the emperor Vespasian and his successor, Titus. The massive structure was host to deadly gladiator fights, wild animal maulings and epic sea battles, according to historical records.

The first episode of the NOVA series explores the mystery of how wild lions and elephants "magically" appeared in the arena, where they were pitted against each other or human prisoners, as ancient texts describe. To find out, a team of archaeologists and engineers used ancient Roman building methods to create a 25-foot-tall (7.6 meters) lifting machine and trap-door system, and used it to deliver a wolf into the Colosseum's arena.

"We released a wolf into the Colosseum for the first time in 1,500 years," Glassman said.

Ancient texts also depict elaborate mock naval battles in which ships were sunk and thousands of people – mostly slaves and prisoners – met their deaths. To find out how the Romans may have flooded the Colosseum to stage these battles, the researchers traced a system of aqueducts that lead to the arena. [Photos: Gladiators of the Roman Empire]

The second episode of the new series explores how the city of Petra, in Jordan, came to be built.

"The people who built Petra, known as the Nabataeans, had probably the greatest unknown kingdom that ever existed," Glassman said. "In a 200-year period, they went from being nomadic tradesmen to building a city in the middle of the desert that rivaled the major cities of the Mediterranean world."

Petra was a major stop on the incense trade route, and the Nabataeans brought in water from everywhere within a 20-mile (32 kilometers) radius via a system of channels, dams and reservoirs. Not only did they have enough water to supply a city of 30,000 people, but they had lavish fountains and pools as well, Glassman said. One of the scholars interviewed on the show called it "the Las Vegas of the ancient world."

But the Nabataeans' most impressive feat was a system of templelike tombs carved into the nearby cliff faces. The tombs were "twice the size of Mount Rushmore," and it was always a mystery how they built them without the aid of scaffolding, Glassman said.

NOVA hired a team of stonemasons, a geoscientist and a restoration expert to create their own tomb in a cliff face. The Nabataeans' secret, Glassman said, was starting from the top of the tomb and working their way down, using debris from the sculpting to make a ramp to other areas.

The show's final episode focuses on the Hagia Sophia, a massive stone cathedral in modern-day Istanbul, Turkey, that became a mosque and is now a museum. Built in seven years and completed in 537 A.D., "it was the biggest building on Earth except for the pyramids for over 1,000 years," Glassman said.

How has the giant, domed relic withstood 1,500 years of earthquakes that destroyed all the buildings around it? NOVA hired a team of builders to construct a scale model of the Hagia Sophia on a shake table that simulates quakes. The model withstood a lot of shaking before it finally collapsed.

When the real Hagia Sophia was built, people were aware of earthquakes, but they kept trying to build walls that were thicker and more massive, Glassman said. By contrast, the engineers who designed the Hagia Sophia — who had never built anything before — made it light and flexible, he said. This strategy became the foundation of modern seismic engineering.

Through these investigations, the new TV series explores what these buildings meant to the cultures that built them, Glassman said. "If intelligent life from another planet were to come to Earth, these are some of the buildings we would want to bring them to [in order] to represent the height of our achievements."