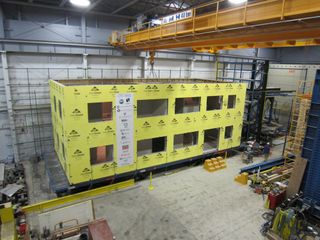 BUFFALO, N.Y. — In a cavernous, warehouse-type building here at the University of Buffalo, a group of men and women put on hard hats and waited for a 6.7-magnitude earthquake to strike. But this was no ordinary quake, generated by the rupture of faults deep in the Earth — these rumblings were being created on purpose.

Researchers from Johns Hopkins University spent the summer at the University of Buffalo's earthquake engineering research center to see how a two-story building made of cold-formed steel — thin, lightweight sheets of steel that are rolled or pressed into beams to construct, among other things, modern skyscrapers — can withstand powerful seismic forces.

Over the past several months, Benjamin Schafer and Kara Peterman, both of the Whiting School of Engineering at Johns Hopkins in Baltimore, conducted a series of tests on two similarly constructed buildings — one consisting of just a bare steel skeleton, and a second with exterior sheathing and nonstructural elements added, including interior walls, a stairway and a coat of yellow weather-proofing material.

By mid-August, the researchers had already completed 131 different shake tests on their buildings, but on Aug. 16, Schafer and Peterman prepared for their final and strongest test yet: a simulation of the 1994 Northridge earthquake that rocked Los Angeles, killing 60 people and causing roughly $13 billion in damage. [Image Gallery: This Millennium's Destructive Earthquakes]

In the earthquake testing facility, the two-story building is imposing, measuring 50 feet (15 meters) long, 20 feet (6 m) wide, and 20 feet (6 m) tall. The structure's appearance is unremarkable — easy to mistake for the first floors of any budding new development on a construction site — save for a cluster of heavy-duty chains stemming from the unfinished roof to an overhead crane that was used to lower the building onto the lab's massive shake tables. These moving platforms, powered by hydraulics pumps that are just barely visible through a gap in the floor, are capable of replicating the seismic forces of an earthquake.

In their previous tests, the cold-formed steel structures were designed to stand up to the smaller quakes that Schafer and Peterman were creating, but the researchers were now curious how their second building, outfitted with interior walls and a stairway, would fare if they recreated the forces such that the building was sitting almost on top of the Northridge earthquake's fault line.

"In our other tests, we knew the building was engineered to still be standing after, so that definitely instills a sense of confidence, but today is a big question mark," Peterman, a friendly and talkative civil engineering doctoral student, told LiveScience with a nervous laugh on the morning of the final shake test. "We really don't know what's going to happen. We're hoping it's not catastrophic, at least."

When buildings are designed, structural engineers incorporate so-called shear walls, which are composed of braced panels and are used to anchor the building against forces such as strong winds or seismic activity. But during actual earthquakes — particularly very intense ones — buildings can act somewhat erratically, Schafer said.

"No one tells the building which part should resist the earthquake and which should not," Schafer, the tall and bookish chair of the department of civil engineering at Johns Hopkins, and the study's lead researcher, animatedly told LiveScience. "A lot of the building's parts can get engaged in an earthquake, and you can't avoid that. For a really big earthquake, most of the theories say that all the little stuff might get damaged, but you'll be left with the shear walls that you designed in the beginning to support it. But, you can't test out that idea until you have a big earthquake. Today, we're making a big earthquake."

Ten cameras and more than 100 sensors were attached to the building to record the amount of movement and damage the structure sustained during the test. When the platforms began shaking, the two-story building rocked from side to side, amid loud rumblings and several deafening cracks.

At the end, Schafer and Peterman waited for the sensors to indicate that the building was still structurally sound before they stepped inside to inspect the amount of damage. After carefully examining the walls up close, shining flashlights into dark corners and bending down to see the joints between walls, the researchers huddled together to discuss their early observations before Schafer declared the test a resounding success.

"There are cracks and a lot of damage in corners, but it's all pretty cosmetic," Schafer said excitedly after the inspection, smiling widely, as if surprised by the building's resilience. "In a few places on the exterior, we can see some damage, and once we take off the [weather-proofing material], we may be able to see the shear walls damaged, but the performance was far better than we would have ever imagined."

Schafer and Peterman will have to tear down their test building this month to make room for a new team of researchers who will be moving into the earthquake facility. After enduring a summer of shake tests, culminating in the simulated Northridge quake, their building, with its bare walls and lone staircase, has done its job.

Peterman said she will be sad to see the building torn down, but she doesn't get attached to her test structures anymore. Still, the first object on which she ever performed earthquake tests — a small, palm-size object — sits proudly on her desk at work, she said.

Meanwhile, it will take Schafer and Peterman months to pore through all the data from their sensors, but during their initial examination of the building, the researchers did encounter something unexpected on the second floor.

When the structure was designed, 11 concrete blocks, each weighing 2,000 lbs. (907 kilograms), were piled onto the second floor to represent furniture and people who might occupy in a building in a real earthquake, and were in the actual Northridge earthquake. [The 10 Biggest Earthquakes in History]

After the simulated Northridge quake, Schafer and Peterman were surprised to find that the 2,000-lb. blocks moved about 10 inches (25 centimeters) from their original positions.

"When the building moved, the blocks were their own thing," Schafer explained. "They all moved, including one that donked into the back wall, which might have been the crack we heard."

In their autopsy of the building, Schafer and Peterman will scrutinize every piece of the building, including looking for hidden damage inside the walls. Their results could help improve nationwide building codes for cold-formed steel buildings, which are increasingly popular for low- and midrise buildings. The research could reduce the likelihood of future catastrophic building collapses in earthquake-prone areas of the country.