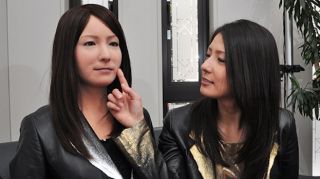 What if you could check into a hotel, have your luggage carried to your room and order a coffee — all with help from a team of robots?

A new hotel at a theme park in Nagasaki, Japan, hopes to make that dream a reality. The Henn-na Hotel (whose name means "strange hotel") will be partially staffed by androids that work as reception attendants, robot waiters, cleaning staff and a cloakroom attendant, The Telegraph reported.

Developed by Japan's Osaka University and manufactured by the Japanese robotics company Kokoro, many of the "Actroid" robots resemble a young Japanese woman. The bots will be able to speak Japanese, Chinese, Korean and English, make hand gestures, and pull off the somewhat creepy feat of mimicking eye movements, according to The Telegraph. [Super-Intelligent Machines: 7 Robotic Futures]

The android-staffed hotel will be part of a theme park called Huis Ten Bosch, which is modeled after a typical Dutch town. Hotel guests will be able to access their rooms using facial recognition software instead of keys, if they choose.

"We'd like to draw visitors to this setting surrounded by nature by establishing a smart hotel, which could be something we could spread through Japan and the world, a spokeswoman for Huis Ten Bosch told The Telegraph.

If the robot hotel is a success, another one may be opened in 2016, the spokeswoman added.

For those Luddites who prefer a human touch, the hotel will also employ 10 human staff members.