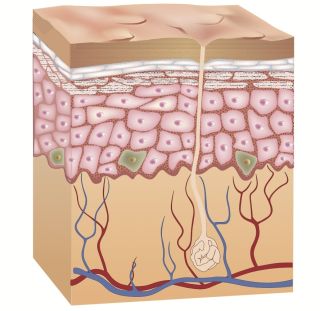 Human skin from cadavers that has had its cells removed can help treat wounds, researchers say.

This new treatment could prove especially helpful for chronic skin wounds, which are a growing threat to public health, scientists added. According to the National Institutes of Health, treating such wounds costs the United States more than $25 billion annually.

About 1 in 100 people in the United States will suffer from chronic leg ulcers during their lifetime. With an aging population and increasing rates of diseases linked to ulcers and other skin wounds, such as diabetes, obesity and heart disease, the prevalence and costs of such wounds are likely to rise in the future, said study senior author Ardeshir Bayat, a bioengineer and clinician-scientist at the University of Manchester in England. [Where Is Heart Disease Risk the Highest and Lowest? (Maps)]

"A chronic wound is one that has not healed for six to eight weeks, or in some cases years, no matter how many dressings are placed on them," Bayat said.

In the past three decades, scientists have developed a variety of skin substitutes to help treat wounds. These often aim to mimic the body's extracellular matrix, the complex scaffolding of proteins and other compounds that helps bind cells together.

Now scientists are going beyond mimicking the skin's extracellular matrix, and experimenting with therapies based on real human skin. "You can try and re-engineer human skin, but the holy grail of skin substitutes would be to get something as beautiful and perfect as what the human body has already created," Bayat said.

The researchers used skin from human cadavers. "The skin is the largest organ in the human body, and the skin we work with is just like any other organ donated by people," Bayat said.

The scientists use antibiotics to decontaminate the skin and a combination of detergents, enzymes and other chemicals to remove cells from the skin. This "decellularized" skin no longer contains cells that can trigger immune reactions and cause a person's body to reject the organ.

Bayat and his team specifically experimented with the dermis, the skin's inner layer, which contains skin's blood vessels, nerve endings, sweat glands, hair follicles and other key structures. What is left after decellularization is the skin's extracellular matrix.

"Imagine a house with all the furniture and people taken out — you're left with an empty shell that is easier to populate than just building a house from scratch," Bayat said. "In the same way, decellularized dermis provides a scaffold that the body can try to populate with its own cells. The good thing about decellularized dermis is that it has a structure and composition that the human body is already used to — the body responds more favorably to what it is used to than what it isn't."

In prior experiments, Bayat and his group found that decellularized dermis could help treat chronic skin wounds.

"We had a patient, a 92-year-old lady, who had a skin ulcer for 20 years, even after getting treated with various dressings," Bayat said. "After we treated her with decellularized dermis, she healed within four weeks."

Now Bayat and his colleagues find that decellularized dermis can treat not only chronic wounds, but acute wounds as well, the kind that one might get from an injury or a burn.

In their new study, the scientists removed four disks of skin, each about 0.2 inches (5 millimeters) wide, from 50 healthy volunteers. For each volunteer, one wound site was left alone, the next had the removed skin re-inserted, another was treated with an artificial skin substitute, and the last was treated with decellularized dermis.

Bayat and his colleagues now plan to test decellularized dermis on a larger number of patients, and also add electrical stimulation they think can accelerate the integration of skin substitutes into the body.

The researchers detailed their latest findings online Jan. 20 in the journal PLOS ONE.