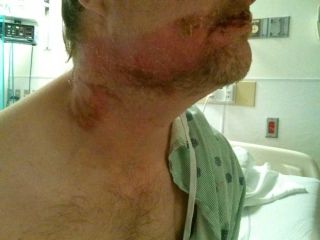 A man had trouble breathing and got frostbite after huffing air duster in a grocery store bathroom.
(Image: © © BMJ Publishing Group Ltd. 2015)

A 40-year-old man in Michigan who intentionally inhaled three cans of compressed air to get high was rushed to a hospital, where doctors treated him for frostbite and significant swelling in his airway, according to a new report of his case.

The case highlights the dangers of huffing, the case report said. Although huffing is typically seen in teenagers, who often can't afford other recreational drugs, it's important to recognize that older people also abuse and huff substances, said Dr. Amanda Winston, an internal medicine and pediatrics resident at Hurley Medical Center in Flint, Michigan, who treated the man and co-authored the case report, published Jan. 7 in the journal BMJ Case Reports.

"It's a quick, cheap and easy high," Winston told Live Science. "It happens in all age groups, and it's dangerous to the point of life threatening." [The Drug Talk: 7 New Tips for Today's Parents]

The man in the case had been huffing for the previous three or four years, according to the case report. On the day he wound up in the hospital, he had huffed three cans of air duster over four hours, and was in a public restroom at a grocery store when he collapsed. (Air dusters are cans of air under high pressure that can be used to clean dust and lint off of electronics, when liquid cleaners cannot be used.)

The man reported feeling short of breath and having a tingling sensation in his lips and tongue. By the time he reached the hospital, his lips and the back of his throat were significantly swollen, and he had trouble breathing and swallowing, according to the report.

The doctors put a tube into his throat and placed him on a ventilator to help him breathe. Once they admitted him to the intensive care unit, the right side of his neck began to redden and swell, and developed blisters that were oozing with fluid.

The man said that he smoked a pack of cigarettes a day, and also had depression and had thought about suicide, for which he had received behavioral therapy. But he said he wasn't trying to harm himself when he huffed the three cans of air duster that day, according to the report.

It's likely that a compound called 1,1-Difluoroethane, which used in refrigerants and other coolants, along with the compressed air in the air duster led to the man's frostbite and the tissue damage on his face. He also developed swelling in his airway, a condition known as angioedema.

Doctors gave him steroids and antihistamines to control the inflammation, and a round of antibiotics to ensure he didn't have a bacterial infection. After five days, he was well enough that the doctors could remove the ventilator. The man's swelling and blistering slowly subsided with the aid of treatment, Winston said.

Huffing is a national problem in the U.S., the researchers said. They noted that the drug testing that companies may require of their employees often doesn't look for evidence of huffing. One in five American teenagers use inhalants to get high, according to the National Institute on Drug Abuse. Several hundred people are reported to die yearly from inhalant abuse, but the true tally is probably higher because the problem is underreported, experts say.

"Even if they can't afford hard drugs, this is really a dangerous type of addiction, and can certainly lead to long-term brain damage, cardiac arrhythmias, psychological effects, depression [and] anxiety," said Dr. Robert Glatter, an emergency physician at Lenox Hill Hospital in New York City, who was not involved with the case report.

"There should be a national wake-up call to all parents and teens," Glatter said. "If this is something that has ever been done by a child, you need to put the child into counseling and you need to take this very seriously."