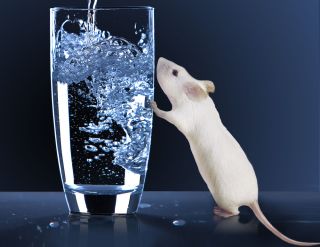 By shining light on a mouse's brain, scientists made the animal want to drink even if it wasn't thirsty.
(Image: © Yuki Oka, Michelle Williamson and Charles Zuker)

You know the feeling: the dryness in the mouth, the stickiness in the throat and the creeping salivation — thirst.

Understanding how the brain causes feelings of thirst could help scientists learn what goes awry in disorders that make people drink too much or too little fluid, researchers say. [See video of a mouse's thirst switched on]

"Thirst has attracted a lot of interest because it is such a basic function for all organisms," said Yuki Oka, a neuroscientist currently at the California Institute of Technology and co-author of the study published today (Jan. 26) in the journal Nature.

Before this study, scientists knew which brain regions were activated by dehydration and hydration. "But key information was missing as to which were controlling thirst," Oka told Live Science.

In the new study, Oka and a team of colleagues at Columbia University used a technique called optogenetics to pinpoint the origin of thirst impulses in the brains of mice. The researchers injected the mouse brains with a virus that made certain cells sensitive to laser light, and when scientists shone the laser on those cells, it caused them to turn nerve impulses "on" or "off."

The team targeted neurons in a structure called the subfornical organ (SFO), which is known to be active when a mouse is dehydrated. "The SFO is a sort of sensor in the brain," Oka said. The researchers also chose this region because it lies outside the blood-brain barrier, a highly selective membrane that keeps the blood separate from the fluid surrounding the brain and the spinal cord. This made it easier to inject the virus into the neurons to make them sensitive to light.

Previous studies had used small electrical shocks to activate this region, but that method makes it impossible to pinpoint the individual neurons involved in thirst.

Using optogenetics, Oka and his colleagues identified two distinct populations of cells involved in thirst. When the scientists shone the laser on one set of cells, the mice drank voraciously, even if the animals weren't thirsty before. These mice consumed up to 8 percent of their body weight in water, the equivalent of a 180-lb. (82 kilograms) man drinking 1.5 gallons (5.7 liters) in 15 minutes, Oka said. When the researchers shone laser light on the other set of neurons, mice that were thirsty immediately stopped drinking.

The laser signal could only make the mice drink water, not oil or other liquids, the researchers said. In addition, stimulating thirst had no effect on hunger or desire to consume salt, they added.

The scientists don't know whether the mice truly felt thirsty when the light was shone on the animals' brains, but their behavior suggests that's the case, Oka said.

It remains to be seen whether the brain areas that control thirst or drinking in mice control the same behavior in humans. Future studies could use magnetic resonance imaging to scan people's brains and determine which regions may control thirst, Oka said.