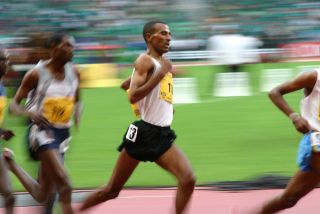 Photo taken by Christophe Libert. There are no usage restrictions for this photo

Health experts cautioned yesterday that some endurance athletes drink too much water during exercise and are at risk of deadly "water intoxication." Marathon runners, triathletes and cyclists are familiar with dehydration, caused by not drinking enough. But fewer are aware that too much water can kill. Water intoxication is formally called exercise-induced hyponatremia (EAH). One recent study found that 13 percent of Boston marathon runners suffered from EAH, though most cases were mild. But since 1985, there have been at least eight documented fatalities from EAH related to long-distance events. The disorder occurs when endurance exercisers drink more fluid—water or sports drinks—than their kidneys can excrete. Excess water can dangerously dilute the level of sodium in the blood needed for organs to function. “The public’s impression of the amount of water that is necessary to drink for good health is not based on real factual data,” said Dr. Joseph Verbalis at Georgetown University Medical Center. “Many in our society have promoted the idea that you need to continually drink a large amount of fluid, such as 8 ounces of water eight times a day. But most people don’t really need that much.” Verbalis and colleagues wrote about the the causes of this disorder in the May issue of Sports Medicine and released a statement yesterday. EAH "could be prevented if only people would respect their personal thirst 'meter,' or would undertake a 'sweat test' to determine how much water they actually need to drink in order to replace just the body fluids lost during exercising," the researchers stated. EAH mostly afflicts people participating in events for 4 hours or more. “The average person who goes out for an hour or two of strenuous exercise is not going to be at risk for this,” Verbalis said. The issue remains conterversial, however. Some trainers and sports physiologists contend that by the time you’re actually thirsty, you have lost enough fluid to already be dehydrated, so they say you need to drink in anticipation of becoming dehydrated, Verbalis explained. “We dispute that notion," he said, "and contend that thirst is a good indicator of your body’s need for fluids, and that there is a window of time over which you can rehydrate safely.”