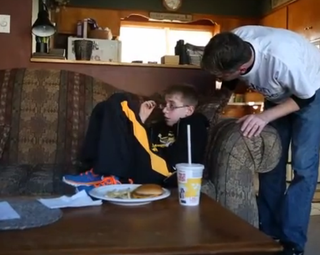 The parents of Landon Jones have to encourage their son to eat and drink, because he never feels hungry or thirsty.
(Image: © Screenshot, The Des Moines Register)

Landon Jones is a 12-year-old boy with a very unusual condition: He never gets hungry or thirsty.

The boy, of Cedar Falls, Iowa, noticed something was wrong when he woke up on Oct. 14, 2013, feeling dizzy and suffering from chest congestion. A chest X-ray later showed he had a bacterial infection in his left lung, which later healed.

But ever since that day, according to The Des Moines Register, Landon has had no desire to eat or drink, even though he can still taste and smell normally. Landon's weight has dropped from 104 lbs. (47 kilograms) to a mere 68.4 lbs. (31 kg), and his parents say they have to constantly remind him to eat and drink. [16 Oddest Medical Cases]

The boy has had medical tests and doctor's appointments in five cities, in attempts to find the cause of his bizarre condition. He has undergone a spinal tap, brain scans, abdominal imaging, and nutritional and psychiatric evaluations, but doctors have been unable to diagnose the problem.

"This is exceedingly unusual. I've never heard of a case like this," said Dr. Ashesh Mehta, director of epilepsy surgery at the North Shore-LIJ Comprehensive Epilepsy Care Center in Great Neck, New York, who was not involved in the boy's treatment.

Hunger and thirst in the brain

Hunger and thirst are part of a larger circuit controlled at many different levels in the brain, Mehta told Live Science. A problem anywhere along this circuit could cause Landon's symptoms, he said.

Dr. Marc Patterson, a pediatric neurologist at the Mayo Clinic in Rochester, Minnesota, who has been treating Landon, told the Register that there may be a problem with Landon's hypothalamus, a small, pea-size region at the base of the brain that controls hunger, thirst, body temperature, sleep and other vital functions.

It could be that the bacteria that infected Landon's lung crossed the blood-brain barrier — the selectively permeable membrane that separates the body's circulatory system from the brain — and affected his hypothalamus. An infection or lesion of this brain area could explain why Landon feels neither hunger nor thirst, doctors say.

"It makes sense that the two go hand in hand, because hunger and thirst are both controlled by the hypothalamus," said Dr. Caroline Messer, an endocrinologist at Lenox Hill Hospital in New York City.

But another possibility is that Landon has developed a resistance to the hormone ghrelin, which stimulates hunger, or now has an overproduction of the hormone leptin, which causes feelings of satiety. But these would explain only the loss of appetite, not the lack of thirst, Messer told Live Science.

Even though Landon's parents constantly remind him to eat, he is still losing weight, the Register reported. If he can't ingest enough calories by eating, doctors said they may have to install a feeding tube.

But such tubes are prone to infection, and carry a high risk of complications, Messer said. Instead, Landon might benefit from a drug called megestrol acetate (brand name Megace), an appetite stimulant often given to cancer and AIDS patients, she said.

Landon's inability to feel thirst could also upset his body's electrolyte balance, and his sodium levels could become too high if not monitored, Messer said.

Landon's case may be the only one like it in the world, his doctor told The Register. His family has contacted a division of the National Institutes of Health that evaluates and treats patients with rare, undiagnosed diseases. The program invites only 50 to 100 patients to its Bethesda, Maryland, campus each year to be evaluated by a team of specialists, according to CBS News, and Landon hopes to be one of them.

"One would hope he'll outgrow this," Mehta said. "But for now, [Landon's family] will have to keep a close eye on calorie intake."