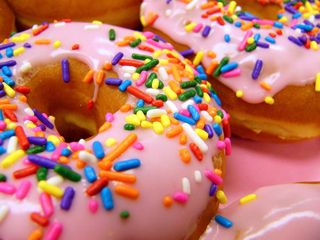 Contrary to the moans of many dieters, being hungry may make you happy. Or, at least, it can be a serious motivator whose evolutionary intent was to help you find dinner instead of becoming dinner.

When our bodies notice we need more calories, levels of a hormone called ghrelin increase. Ghrelin is known to spur hunger, but new research suggests this may be a side effect of its primary job as a stress-buster.

Researchers manipulated ghrelin levels in mice through a variety of methods, including prolonged calorie restriction, ghrelin injection and a genetic modification rendering the mice numb to ghrelin’s effect.

Mice who had limited ghrelin activity seemed depressed. If pushed into deep water they made no effort to swim. When introduced to a maze, they clung to the entryway. And when placed with other mice, they tended to keep to themselves. (These behaviors were reversed when the mice were given a low-dose antidepressant commonly prescribed to humans.)

In contrast, mice with high levels of ghrelin swam energetically in deep water, looking for escape. They eagerly explored new environments. And they were much more social.

Mice are thought to be good analogues for humans in tests like these. The study, funded by the National Institutes of Health and other organizations, is detailed in the July 2008 issue of the journal Nature Neuroscience.

The researchers think that hunger-induced happiness is an adaptive measure. Getting food, especially in the wild, requires concentration, clear-headed perception and often cooperation.

If hunger made us walk around in a funk, we’d likely become someone else’s dinner. Instead, ghrelin motivates and focuses us on getting some F-O-O-D! Stat!

Hunger is not the only stressor that causes ghrelin to rise. Social anxiety can stimulate it as well. When mice were exposed to an older “bully” mouse (think, overbearing boss), ghrelin levels rose and stayed high for weeks.

Elevated ghrelin could be why some people overeat when under pressure. If the stress-induced snack is avoided, the research suggests, ghrelin levels will remain high and help us confront the stressor in a calm, effective way.

What about when we are actually hungry? Surely, there is nothing fun about that!

“You don’t really see an [antidepressant] effect until you have lost, say, 10 to15 percent of your body weight,” said lead researcher Michael Lutter of the University of Texas Southwestern Medical Center. But once you are getting regular boosts from ghrelin, it could become addictive – which may explain why anorexics have such a difficult time recovering.

It could also explain the Calorie Restriction (CR) movement. CR devotees are motivated, at least at first, by animal studies that show eating 20 to 30 percent less than considered adequate extends life span (even if it also, according to the Journal of the American Medical Association in March 2007, results in bone and muscle wasting, fatigue, constipation, dizziness and other signs of poor health).

While CR’s anti-aging effect is likely operating through a different mechanism, Lutter wouldn’t be surprised if the prolonged diet also gives CR followers a mood boost.