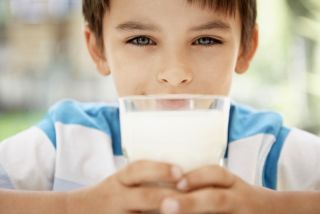 We've all heard the slogans about milk: It does a body good, it's a natural thing to drink and it builds strong bones. And many people who heard these slogans while growing up were urged to drink a few glasses of milk a day because of its health benefits.

But do kids really need to guzzle the white stuff?

It turns out the case for milk is fairly weak. Although milk is a good source of protein, calcium and vitamin D, other food sources also provide these nutrients. What's more, there's no evidence that drinking milk reduces bone fractures, and drinking too much can lead to anemia and may contribute to obesity, experts now say.

"Do kids really need milk? No, of course they don't," said Amy Lanou, a professor of nutrition at the University of North Carolina at Asheville. Most people in the world do not drink milk after they are weaned from breast milk, and yet still get adequate nutrition, she added. [10 Ways to Promote Kids' Healthy Eating Habits]

Here is a look at the benefits and potential pitfalls of drinking milk.

Most people have heard that the calcium in milk helps people grow strong bones. Milk is also fortified with vitamin D, a chemical typically synthesized by the skin when people spend time in sunlight, but which can be hard to get from the diet, as it is naturally found in only a few foods such as fatty fish, egg yolks and beef liver. Vitamin D deficiency can cause rickets, a disease in which people develop bent and weakened bones, and has also been tied to other problems, such as muscle and nerve ailments.

And milk is a rich source of protein and calories, which is important for growing kids. Malnutrition is still a problem, even among children in the developed world. Picky eaters may struggle to get enough protein and calories in their diets, and milk is an easy, nutrient-rich way to deliver those calories, said Dr. Jonathon Maguire, a pediatrician at St. Michael's Hospital in Toronto.

Calcium can be found in many other food sources besides milk, including nuts, beans and greens, Lanou said.

And new research also raises questions about the notion that milk actually keeps bones strong. A 2013 study published in the journal JAMA Pediatrics found that children who live in countries with lower rates of milk consumption have lower fracture rates than those in milk-drinking countries. In general, the notion that kids need very high levels of calcium to keep their bones strong may be oversold, Lanou said. Several studies suggest that the impacts made on bones when kids exercise or do other physical activity is the main factor in bone growth.

"The best way for kids to take good care of bones is to go outside and play," Lanou told Live Science.

And although vitamin D is certainly an essential nutrient, it doesn't occur naturally in milk, so other fortified foods such as breakfast cereal, orange juice and soymilk are equally good sources, Lanou said. The amount of protein in milk can also be found in lots of other sources, including beans and eggs.

Three-fourths of the world's population has lactose intolerance or cannot comfortably digest lactose, a sugar found in milk. Calcium can also inhibit the absorption of iron, which means drinking too much milk can lead to anemia, Maguire told Live Science.

The calorie-laden beverage could also promote obesity. A December 2014 study in the Archives of Disease in Childhood found that preschoolers who drink three or more servings of milk a day are likelier to be taller, but also more obese and overweight. Whole, or full-fat, milk has high levels of saturated fat, which has been tied to health problems. And some studies suggest low-fat and skim milk may not be an answer, because people feel less full after drinking it.

Another problem is that filling up on milk can mean not eating other healthy foods on the plate, and this can be especially true of kids who are picky eaters.

"If you actually feed a child three servings of cow's milk, how are they going to have room for other healthful foods like those vegetables, legumes and lean proteins?" Lanou said.

The health benefits of drinking flavored milks are even more dubious, Lanou said.

"An 8-ounce glass of low-fat chocolate milk has the same number of calories from sugar as an 8-ounce glass of Coke or Pepsi," Lanou said. Added sugar has been tied to a host of health problems, from obesity to diabetes to heart disease.

In the end, milk may not be a superfood, but it does provide valuable nutrients that can be hard to get into kids in other ways, Maguire said. Maguire has found that children seem to have good iron stores and vitamin D levels at around two glasses a day, which is the current recommendation of the American Academy of Pediatrics.

But if a kid simply hates the taste or has trouble digesting milk, parents don't have to push it. Instead, they can serve other foods to make sure their kids get the proper nutrition, Maguire said.