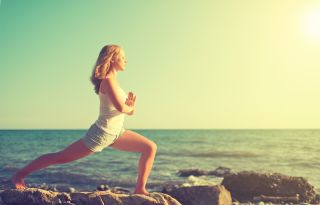 One of the nice things about yoga is that it can be done just about anywhere. With a mat (or a pair of sticky yoga socks) and a few minutes of free time, you can get in a mind/body workout.

Sometimes, though, a little inspiration helps. Dozens of yoga apps offer this inspiration in the form of mix-and-match workouts and breathing exercises that can be customized to give you the difficulty level you're looking for and take only the amount of time you have to spend. In essence, your smartphone becomes your yoga instructor.

For beginners, yoga apps can also seem less intimidating than yoga classes, but beware: No app we found can replace an in-person lesson for teaching the correct alignment and safety in postures, and it was very rare that apps offered modifications for beginners, even in beginner-level sequences. We'll note which apps are more beginner-friendly, but if you've never done so much as a Mountain Pose in your life, seek out at least one beginner class before starting an app-based practice.

Caveats aside, our favorite yoga workout app is Yoga Studio (iOS, $3.99).This app is a perennial favorite in the "Top Paid Apps" category on iTunes, and for good reason. It has a clean, sleek design that is easy to navigate. Classes are sorted by level, focus, intensity and duration. And there are lots of them: 10 for beginners, 11 for intermediate yogis, nine for advanced practitioners and more than two dozen more specialty classes, including deep meditations, quick 10-minute practices and yoga for runners. You can pick and download a class, or create and save a class that you design by picking individual poses (or preset pose sequences) to string together.

The classes themselves are led by a soothing female voice-over, with video clips of a model performing each pose. Users can choose from a playlist of soothing and unassuming music, or import their own songs. The intro page to each workout lists how long it is and the number of poses it includes, followed by a list of each pose. If, at any time, you get to a pose that doesn't work for your body, you can skip it and move on to the next. The clear instructions and video encourage proper posture, making this app one of the better choices for beginners.

Yoga Studio also features a comprehensive library of poses that includes both English and Sanskrit names. Each entry describes the proper alignment for the pose, along with modifications that can be made to make it easier, the benefits of doing the pose and the reasons you may want to avoid the pose. This is a great beginner resource, but it would be nice if at least some of the information on modifications could be included in the class voice-overs — it's simply not practical to expect beginners to stop and look up every pose in the library to find modifications during a workout.

Finally, Yoga Studio has an excellent calendar feature that allows you to pick classes in advance and schedule a time and date to complete them. The app will then send a reminder to get you to your mat.

Yoga Studio is like most yoga apps, in that the poses are demonstrated through canned video clips and voice-overs. This is practical but can eventually become repetitive. If you're looking for something that feels more like a real yoga class, we highly recommend the YOGAmazing app (iOS, Android, $4.99). Led by instructor Chaz Rough, this is a podcast-style app, and it currently has nearly 500 episodes available to stream or download. Each episode has a theme, like "Yoga for Office Workers" or "Weight Loss Flow." Even the unusual themes have universal appeal. For example, "Yoga for a Choir" focuses on standing poses that emphasize good posture, something that people other than singers can appreciate.

The appeal of this app is the instructor, Rough, who can come across as a bit goofy but is always down-to-earth and unintimidating. The video format allows Rough to chat throughout poses, offering modifications and encouragement. The classlike format makes this app another one that is good for beginners.

Before most classes, Rough reads a sponsored ad, and then begins the class with a brief explanation of the genesis of the class (many are user-suggested). The main downside to the app is that there are no class descriptions beyond the title, so users have to click and start the stream or download it before they even know how long the class is. Most sessions, however, are between 15 and 30 minutes long. We found that even with a good Wi-Fi connection, the streaming classes stalled in some spots; fortunately, there is an option in Settings to turn off "high-quality playback," which solved the problem.

Another good personality-driven app is Ashtanga Yoga with Michael Gannon (iOS, $1.99; Android, $3.15). Ashtanga yoga is a style that follows a specific sequence of poses, beginning with Sun Salutations, then standing poses, sitting poses, backbends and finishing poses. In other words, you won't get a ton of varied workouts with this app. What you will get, however, is a great sequence. The poses are demonstrated with photos, rather than video, but Gannon's voice-over cues do a good job of explaining how to get into and out of poses. Written and video intros explain the principles of Ashtanga yoga — a nice feature found in few apps.

Beginners may find this app intimidating because of the lack of video showing how to make transitions between poses and because the images show poses on an expert level, with no leveling down for yogis who can't touch their toes. For more experienced practitioners, this app provides a good workout that you can take with you.

If you don't mind your yoga demonstrated by a cartoon, Pocket Yoga (iOS, Android, $2.99) offers a series of practices designed for different goals. "Ocean" practices offer a cardio workout, "desert" practices focus on detox and flexibility, and "mountain" practices are in a power-yoga style. Each of these categories offers a 30-, 45- and 60-minute practice option. The app will also lead you through sun salutations.

Pocket Yoga's cartoon instructor practices against a backdrop of a home, office or studio. The more you use the app, the more additional background options become available. The in-app music is unobtrusive, but users can also set up custom playlists of their own music. The voice-over instructions include guidance on when to inhale and exhale — a key component of yoga that many apps neglect. The app also has an option to show how many calories you burned after each practice. Oddly, though, many poses are given alternative names, which can be confusing.

Simply Yoga (iOS, Android, Free) is just that: simple. The design of the home screen is reminiscent of the early days of home computers, but users can launch right into practice without any fuss. The free app comes with 20-, 40- and 60-minute level 1 practices. Most people will want to upgrade to the premium app for $3.99 to get higher-level sequences, but the big advantage of this app is that the free version allows users to test it out before committing to a paid version.

A video sequence walks you through the practices, which are heavy on sun salutations and likely move a little too quickly for true beginners. Experienced yogis, however, might like the faster pace. The background sound, which can be switched off, is soothing ocean noises. One standout feature of the Simply Yoga app is the scheduler, which allows the app to send notifications to remind you to practice.

One other free app worth trying is Daily Yoga (iOS, Android, Free). The free version offers about a dozen workouts, each with an option for a short (15- or 20-minute) or longer (30-minute) sequence. Access to more workouts requires an upgrade to the Pro version, which costs $29.99 a year, or $12.99 for three months.

Daily Yoga is one of the better options for beginners because the voice-over instructions are clear and the poses are demonstrated on video. The transitions between video segments can be a bit jumpy, though. In our testing, the major downside of the app was that the music wouldn't mute, despite an option to do so. There are six in-app yoga playlist options with the free version, with another dozen playlists offered with a Pro membership.

Want to be led through a yoga routine by a literal muscleman? iYoga Premium (iOS, $5.99) demonstrates poses with an animated anatomical diagram, showing exactly which muscles expand and contract throughout the pose sequence. The app comes with seven preset yoga sequences, most of which are about 20 minutes long. There is also an 81-pose library from which beginning users can create their own practices. Unfortunately, it costs an additional $1.99 to get the expanded library that includes intermediate and advanced poses.

On top of the apps that offer full yoga classes, a number of offerings are designed for travel, the office or brief "yoga breaks." One fun way to get more yoga into your day is to download 5 Minute Yoga (iOS, Free). Set a reminder, and this app will alert you that it's time for a 5-minute yoga break consisting of five poses held for a minute each. The app lets users pick their own playlists for a truly relaxing interlude.