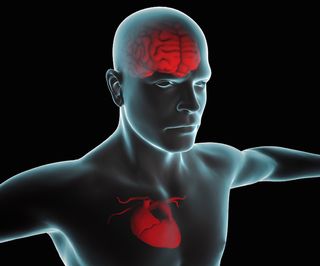 A sound mind in a sound body: The Roman poet Juvenal wrote 2,000 years ago that it was worth praying for. And now, scientists at Johns Hopkins University have identified a single protein that indeed supports the health of both the brain and the heart.

The scientists have found that a nerve-growth factor called BDNF (brain-derived neurotrophic factor) — which was already known to enhance memory, nourish blood vessels and nerves and act as natural antidepressant — also helps the heart beat properly.

The finding may explain the association seen in recent years between depression and heart disease, and also lead to new treatments for heart failure, the researchers said.

The results appear today (Jan.12) in the journal Proceedings of the National Academy of Sciences.

BDNF is produced in the brain and, as a growth factor, helps support the generation of new nerves and blood vessels throughout the nervous system. Numerous studies have shown how mice born without the ability to make BDNF die soon after birth from neurological disorders. [Top 10 Amazing Facts About Your Heart]

Similarly, BDNF deficiencies in humans have been associated with depression, dementia, schizophrenia, compulsive disorders and neurodegenerative disorders such as Huntington's disease. And a 2009 study found that increasing the levels of BDNF in rats that were given small amounts of heroin led to their addiction to the drug.

Given that BDNF supports the growth of nerves serving the heart, a team led by Dr. Ning Feng, a cardiology fellow at the Johns Hopkins University School of Medicine, decided to examine the protein's effect on heart function. The team first isolated healthy heart muscle cells from mice and found that, when awash in BDNF, they began to contract and relax, as if the whole heart was beating.

The researchers repeated the experiment with muscle cells from mice with weak hearts and found that, despite the presence of BDNF, the cells did not vigorously contract and relax. This implied that there was something the cells lacked that caused them not to react well to the BDNF.

That something turns out to be a molecule on the cell surface called TrkB, which is a receptor that enables BDNF to enter into the muscle cell, and make it contract and relax. The mice with weak hearts had slightly modified TrkB receptors or related problems blocking the signaling between BDNF and TrkB.

The researchers next found that mice bred to lack TrkB receptors in their heart cells developed impaired cardiac function. Their hearts contracted poorly, pumped blood less efficiently and took longer to relax after each beat.

"Taken together, these findings show that any abnormality in the way BDNF communicates with its receptor and its associated intracardiac signaling appears to unlock a cascade of chemical glitches that eventually leads to poor cardiac function," Feng said.

Such disruption in BDNF communication may also drive the heart failure that happens in some cancer patients taking chemotherapy, said Dr. Nazareno Paolocci, senior author on the paper and an assistant professor of medicine at Hopkins. The patients' chemo treatments may include chemicals that block many growth-factor receptors, TrkB among them, to halt tumor growth.

Targeting the BDNF-TrkB pathway may open up new ways to treat certain kinds of heart disease, the researchers said. One drug that mimics BDNF already has shown benefit in treating people with stroke and other neurological disorders, and may help with heart disease under certain conditions, according to Paolocci.

"BDNF deficiency may not cause full-blown disease, but it could be the proverbial straw that leads to a 'broken heart,'" he said.

Paolocci added that lifestyle factors such as a poor diet or lack of exercise perhaps reduce circulating BDNF or alter properly functioning TrkB receptors, crippling their ability to work with each other, "but we do not have any experimental evidence for that," he said.