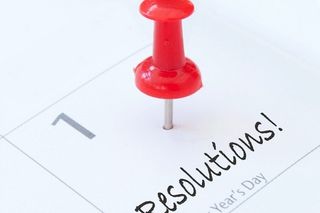 It's that time of year — as 2014 draws to a close, people around the country are making lists of their New Year's resolutions. Many of the lists include things like "quit smoking" and "exercise more," but other lists have more ambitious goals.

We asked some of the scientists we interviewed this year, in our coverage of their work, what their scientific New Year's resolutions are for 2015. Here's what they told us (we condensed and edited their answers).

It is a golden age for those of us studying dinosaurs, so one of my wishes is to find a new dinosaur in 2015! I was part of the team that named Qianzhousaurus sinensis (nicknamed "Pinocchio rex") last year. But I'd love to find a new dinosaur of my own this year. I would like to do more to synthesize the ever-growing fossil record that we currently have, to go beyond finding and describing fossils to look at bigger questions about dinosaur genealogy and evolution.

More personally, I would like to do more next year to bring paleontology, and evolutionary and earth sciences more broadly, to the general public. We need to make sure the public understands science, is fascinated and enthralled by science, wants to fund cutting-edge science, and is not duped by politicians, ideologues and other charlatans who attack science for cynical reasons. I want to be more of a public-facing scientist during this coming year.

The researchers at the Allen Institute for Brain Science have two resolutions for 2015.

Firstly, to build, staff and operate our mouse brain "observatories" that would record the activity of hundreds of nerve cells in the brain as these animals run, attend to stimuli and make decisions. [Most Popular New Year's Resolutions]

And secondly, to build large, open-access databases of mouse and human neurons in the brain's cortex [which is the part of the brain involved in cognition] We want to classify the large variety of nerve cells based on their morphology, their electrical signaling and the genes they express.

I want to finish my work on dark matter and the next generation of dark matter detectors, complete work on neutrinos and the Big Bang, and continue investigations into ultrasensitive detection technologies. I also want to think about the Higgs boson (the particle that gives all other particles their mass, which scientists believe was detected using the Large Hadron Collider at CERN in July 2012), dark energy and Grand Unified Theories (which unify the fundamental forces of particle physics). I want to come up with new and better ways to describe the quantum world to people who aren't scientists, and to finish my new book, "The Greatest Story Ever Told ... So Far."

My scientific New Year's resolution is to write a paper that attempts to contradict my main research topic. Recently, I challenged the staff of my lab to send me any and every piece of scientific evidence they can find that challenges or contradicts the main thrust of our research focus.

Our lab focuses so much on the role that oscillations play in cognition and cognitive functioning that I'm worried we're missing any counterfactual evidence. If my research can't stand up to these kinds of rigors, then we need to seriously rethink our approach.

My resolutions are to read and respond to more emails, keep up with the academic literature — which comes down to asking students and postdocs to tell me about important new papers — and update my web site. But more importantly, I aim keep the big scientific picture in mind, to listen and learn and ask a lot of questions, to enjoy the work, to mentor younger scholars and to always treat everyone with respect.

I resolve to find ways to secure additional funding for Lick Observatory (on Mount Hamilton, in California), so that this great facility for scientific research, education, and outreach can continue to thrive. I want to start reaching out about science to a wider public audience through social media. I hope to find ways to improve the utility of Type Ia supernovae for cosmological distance measurements, in order to better quantify the expansion history of the universe and set constraints on the nature of dark energy. And finally, I aim to learn something new in science every day, especially in fields outside my own.

All scientists should resolve to take greater heed of hypotheses that run counter to their own, because scientists are people, and all people are vulnerable to confirmation bias, and hence to holding on to inadequate theories often their own) for far too long.