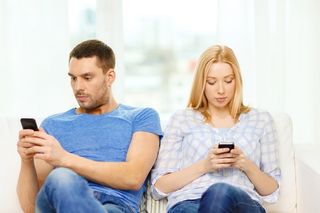 All that texting is changing your brain.

A new study shows that the delicate, repetitive finger movements that people use on their smartphone's touch screen result in a change in the brain's sensory-processing area.

The findings suggest that a common, daily activity such as smartphone use could teach scientists about the details of brain plasticity, which is the ability of the neuronal networks to conform to changes in the body or the environment.

"Smartphones offer us an opportunity to understand how normal life shapes the brains of ordinary people," said study co-author Arko Ghosh, a neuroscientist at University of Zurich in Switzerland.

The body's entire surface is mapped out in a part of the brain called the somatosensory cortex, which receives signals from sensory receptors on the skin and other organs. So, for example, if you touch something with your fingertip, or if you bite your tongue, the region of the cortex that corresponds with those places in the body would receive the signal.

But these areas can adapt and become more sensitive when a particular part of the body is used frequently. For instance, violinists show greater activity in the somatosensory cortex in response to touch on the little fingertip, compared with people who don't use their little fingers as much. [4 Unusual Ways Music Can Tune Up the Brain]

In the new study, researchers set out to examine whether people who frequently use their fingers to work with smartphones undergo a change in the somatosensory cortex. They used electroencephalography (EEG) to measure the brain's electrical activity in response to touch on the thumb, index and middle fingertips. Of the 37 participants in the study, 26 used touch screen smartphones and 11 used old-fashioned cellphones.

The results showed that the people who used the touch screens had greater activity in brain areas associated with the fingertips, compared with those using cellphones.

Interestingly, the researchers said, this change in the processing of sensory information was closely related to how intensely and how frequently people used their fingers, particularly their thumb tip.

"Remarkably, the thumb tip was sensitive to the day-to-day fluctuations in phone use: the shorter the time elapsed from an episode of intense phone use, the larger the cortical potential associated with it," the researchers wrote in their study, published today (Dec. 23) in the journal Current Biology.

The findings suggest that "repetitive movements on the smooth touch screen reshaped sensory processing from the hand and that the thumb representation was updated daily, depending on its use," the researchers said.

In other words, the brain may be continually shaped by people's use of personal digital technology, they said.