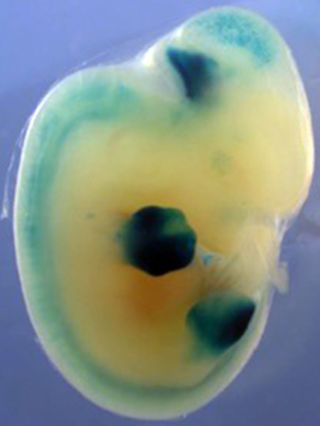 The same autopod-building genetic switches from gar are able to drive gene activity (purple) in the digits of transgenic mice; an activity that was absent in other fish groups studied.
(Image: © Andrew Gehrke, the University of Chicago)

Scientists have long wanted to know whether modern hands are related to the fins of fish, and now a new study finally reveals these structures are, indeed, related.

Researchers compared the genetic sequence of an unusual freshwater fish with that of mice, and found that the genes involved in the development of the mice's hands and feet are also involved in fin development, which suggests the fins of the fishy ancestors evolved into the limbs of modern land animals.

"Fossils show that the wrist and digits clearly have an aquatic origin," Neil Shubin, an organismal biologist at the University of Chicago, said in a statement. "But fins and limbs have different purposes. They have evolved in different directions since they diverged." [10 Useless Limbs (and Other Vestigial Organs)]

In 2004, Shubin and his colleagues discovered the fossil of species called Tiktaalik roseae, an extinct lobe-finned fish that had both front and back legs and lived during the late Devonian period, about 360 million years ago. The scientists thought the creature may have been a link between fish and amphibians.

Since then, many paleontologists have sought to understand how the fins of ancient fish transformed into strong, bony limbs such as those of T. roseae.

At a glance, fins look completely different from land animal limbs. Wrists and ankles consist of small, nodular bones connected to long, thin bones (the fingers and toes). In contrast, the fins of living fish are made up of a set of longer bones that end in small, circular bones called radials.

Until now, scientists have failed to find a link between fins and limbs, but they may have been looking at the wrong fish, the researchers said in their article, published today (Dec. 22) in the journal Proceedings of the National Academy of Sciences. Most studies have involved a giant group of fish called teleost fish that includes almost all of the world's sport and commercial fish.

In the study, Shubin and his colleagues found that sequences of genes called Hox genes, which are important in body development, had very different sequences in teleost fishes than in today's land animals.

However, these genes suggest that more than 300 million years ago, the teleost lineage underwent an event called a whole-genome duplication, in which the entire genome of the fish was duplicated. Such doublings have occurred several times throughout evolutionary history, and help species adapt to a wide array of environments.

Some fish split off from teleosts before the genome duplication occurred. One of these was the spotted gar, a primitive freshwater fish native to North America. The researchers compared the Hox genes of the spotted gar with those of mice, and found an "unprecedented" level of similarity between them.

Next, the researchers inserted gar genes related to fin development into developing mice, which caused the mouse limbs to develop almost identically to those of normal mice. The findings suggest that the wrists and ankles of four-limbed land animals have, indeed, evolved by similar mechanisms as the fins of ancient fish.