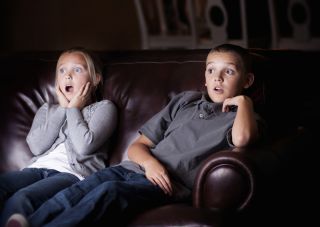 Children's cartoons, often seen as innocent films about royalty and furry animals, are "rife with on-screen death and murder," a new study finds.

"Just because a film has a cute clownfish, a princess or a beautiful baby deer as its main character doesn’t necessarily mean that there won't be murder and mayhem," said the study's lead researcher, Ian Colman, an associate professor of epidemiology at the University of Ottawa, in Canada.

Colman decided to analyze cartoon fatalities after realizing that many of the cartoon movies he watched with his young children had troubling deaths, he said. [Infographic: Deaths in Cartoon Movies Vs. Adult Drama]

For instance, in "The Land Before Time," an animated film about dinosaurs, "the mother of the main character gets savagely attacked and killed by a Tyrannosaurus Rex in the first 5 minutes," Colman told Live Science. "At that point, my daughter was completely hysterical and was begging me to stop the film."

A similar scene played out in "Finding Nemo," when a fearsome barracuda devours the mother clownfish.

"I started to wonder, 'Is this just a coincidence? Are deaths more common in children's films?'" Colman said.

Colman and his colleagues identified the 45 children's animated films with the highest box office grosses and recorded how long into the films the key characters died, their roles in the movie and how they died.

The films, from the 1937 production of "Snow White and the Seven Dwarfs" to the 2013 film "Frozen," were all rated for a general audience (G) or parental guidance suggested (PG). The researchers excluded sequels, as a character might have died in the first movie. They also omitted films without human or animal characters, because children might not view the deaths of characters that are cars, robots or toys in the same way.

For comparison, the researchers matched each cartoon with the two top-grossing films for adults from the same year, including horror films such as "The Exorcism of Emily Rose" and "What Lies Beneath," and thrillers, including "Pulp Fiction" and "Black Swan."

Cartoon characters have lousy life expectancies, they found. Two-thirds of the cartoons depicted a death, compared with half of the adult dramas. In cartoons, most characters die from animal attacks and falls from high places, whereas common causes of death in other films were gunshots, car accidents and illnesses.

"Oddly, falling out of windows or high places is quite common in children's films," Colman said.

But not all deaths were accidental. Cartoon characters were 2.8 times more likely to be murdered than their counterparts in films for adults, the researchers found. Many of those deaths happen to parents, turning the main characters into orphans, Colman found. But that could be a useful plot point, he added.

"Children's films are often about children," Colman said. "If you want them to go on some adventure to overcome some challenges, it's tricky to have parents in the way."

Maybe there's a better, less deadly way to deal with parents, Colman said. "I really wonder if killing them off is necessary, or whether we can just find some other way to get parents out of the picture," he said.

Other times, the bad guy in the film also dies, but usually not until the end of the film.

"I guess that's an easy way to resolve the conflict," Colman said.

But young children, and even teenagers, may not understand the permanence or the complexity of death, said Dr. Victor Strasburger, a distinguished professor of pediatrics at the University of New Mexico School of Medicine, who was not involved in the study.

"People have no idea of how scary children's movies can be," Strasburger said. Before a child watches a movie, parents can search it online or look it up on CommonSenseMedia.org, a nonprofit group that rates movies based on violence, language and sexual innuendos, he said.

Parents can also comfort children by watching movies with them. "That way, if anything really difficult comes up, the kids can ask you about it, or talk with you about it," Coleman said. "And that might be a really positive experience."

The study provides a clever look at the amount of death in children's cartoon movies, said Dan Romer, the director of the Adolescent Communication Institute at the University of Pennsylvania, who was not involved in the study.

"Parents should be aware of the fact that cartoons aren't necessarily free of violence," Romer said. "And that's been known for a while."

The study was published today (Dec. 16) in the special Christmas edition of the BMJ, a more lighthearted issue of the typically serious medical journal.