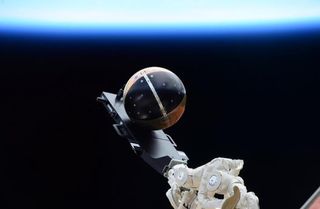 Astronauts released a tiny satellite from the International Space Station last month that will be used as a test bed for a future "space surveillance network," according to the U.S. Naval Research Laboratory.

The spherical machine, called SpinSat, measures 22 inches (56 centimeters) across. The satellite was released using a robotic arm within the space station's Kibo module, under supervision from the outpost's Expedition 42 crew.

The spaceflyers, particularly NASA astronaut Terry Virts, snapped pictures from the orbiting laboratory of the SpinSat as it tumbled and sailed away from the space station. [Satellites Gallery: Science from Above]

One major goal of SpinSat's mission will be to test how well new electrically controlled micro-thrusters can stabilize the satellite's position, NASA said in an update.

SpinSat's main mission, however, is to act as a calibration target for space surveillance. The military is interested in testing whether it can track the orbits and spin of spacecraft and then characterize them.

If the new thrusters work as planned, the International Laser Ranging Service will then watch SpinSat's movements using ground stations around the world. The service tracks satellites with high accuracy — to about 0.4 inches, or 1 cm — but the military is aiming to do better.

Several retroreflectors — cubes with three flat mirrors — are installed on SpinSat. When light strikes any of these surfaces, it reflects in the same direction. As a result, ground stations can fire a laser at the moving satellite and triangulate its position based on the light that gets reflected back.

"They know the laser light's moving at the speed of light," said Nicholas. "They know where they were pointing the laser, and from that get very accurate orbit positions — down to the millimeter level."

Researchers can also figure out the satellite's spin rate as the laser light moves from reflector to reflector. Since there is space between each reflector, scientists can calculate the spin based on how the distance between the reflector and the ground station changes when SpinSat passes overhead.

SpinSat will also provide information on atmospheric density, as gas particles create drag on the satellite. When the sun is at the peak of its 11-year cycle of activity (as it is right now), extreme ultraviolet radiation puffs up Earth's atmosphere. Scientists are interested in studying the effects of this "swollen" atmosphere now, compared with measurements from four satellites, collectively known as the Atmospheric Neutral Density Experiment (ANDE), that were deployed during space shuttle missions in 2006 and 2009.

The new SpinSat is based on ANDE's design, but is slightly bigger. There are two ANDE satellites remaining, but researchers were unable to use them for this experiment, as NASA was concerned that, over time, atmospheric drag may cause these smaller satellites to hit the space station, according to the Naval Research Lab.