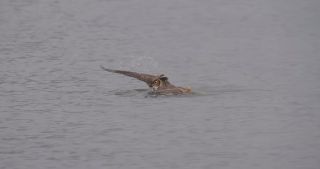 A great horned owl went for an unexpected swim in Lake Michigan this week, after two peregrine falcons forced it into the water, according to Chicago birders who saw the territorial skirmish firsthand.

Steve Spitzer, a birder and photographer who lives near Chicago, filmed the owl's athletic water strokes shortly after the bird entered the lake, he told Chicago station WGN-TV.

Owls are known for their nearly silent flight, but it's not unheard of to see one go for a dip, said Julia Ponder, the executive director of The Raptor Center at the University of Minnesota. [Daring Duos: Unlikely Animal Friends]

For an owl, "if you go after something in the water, and you accidentally get too wet, then sometimes it's easier to swim to shore than it is to fly with wet feathers," Ponder told Live Science.

Birds are known to use their feathery wings as paddles, but it's more common to see an eagle than an owl swimming in a river or lake. "They are often in areas near water," Ponder said. "You have to have those skills."

But swimming is thought to help great horned owls grab midnight snacks. The owls are known to prey on water birds that roost on the open water at night. "Swimming to shore is a natural and necessary follow-up activity when an owl finds itself having splashed down in the middle of a body of water going after prey," said Marc Devokaitis, a spokesperson at the Cornell Lab of Ornithology in New York.

Once an owl swims to shore, it will typically fluff out its feathers to dry.

"They'll shake it off," Ponder said. "They'll preen a bit. They'll rouse. They'll go up into a tree and let their feathers dry."

The incident that sparked the Chicago owl's aqueous escape is also common, Ponder said. Peregrine falcons often prevent other top predators from trespassing into their territory. The clash was likely a way for the peregrine falcons to indicate that "this is my space, and you need to move on," Ponder said.

The onlookers called a bird rescue team, but the owl flew away before the team arrived, WGN reported.