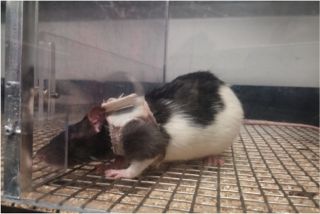 Just as lingerie turns on human males, tiny jackets do the same for male rats, a new study finds.

In an unusual study, researchers allowed virgin male rats to have sex with females wearing special rodent "jackets." Later, when scientists gave the males a chance to mate again, the animals preferred to mate with jacket-wearing female rats rather than with unclad ones.

The findings suggest that male animals can learn to associate the sight and feel of clothing with sex. [51 Sultry Facts About Sex]

In other words, male rats learn that "each time my partner wears lingerie [a jacket], I'm going to have sex," said study co-author Gonzalo R. Quintana Zunino, a psychologist working in the lab of psychologist Jim Pfaus at Concordia University in Montreal.

In previous studies, Zunino, Pfaus, and their colleagues trained rats to associate a particular odor (almond) with having sex, and male rats preferentially mated with females bearing that scent.

This time, the researchers wanted to know whether rats could learn to associate sex with other contextual cues, such as texture. In one experiment, a dozen virgin male rats were allowed to mate with females wearing jackets. Then, the males were put in a chamber with two sexually receptive female rats, one wearing a jacket and one "au naturel."

In general, when rats do the deed, the male approaches the female from behind and grabs hold of her on both sides, which excites her, Zunino told Live Science. If a human experimenter grabs the female in this way, she does a little wiggling dance, he said. If the female is wearing a jacket, the male will feel it with his whiskers while they are mating.

Zunino and his colleagues also wanted to know how the jacket experience affected activity in the rats' brains. Right after the male rats mated with the jacketed females, the researchers sacrificed the animals and injected a dye into their brains that shows the activity of a gene called c-fos, which is a measure of neural activation. Specifically, they looked at c-fos activity in the pleasure centers of the rats' brains, including regions called the ventral tegmental area and the nucleus accumbens.

Taken together, the researchers experiments reveal that rats can learn to associate sex with a variety of contextual cues, including the texture of clothing. While rats are quite different from humans, lingerie may have a similar effect on human males, Zunino said.

The findings were presented Nov. 17 at the 44th annual meeting of the Society for Neuroscience in Washington, D.C.