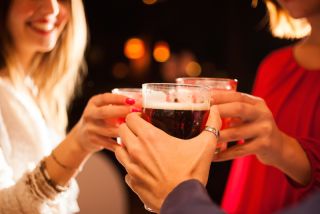 The ability to break down alcohol likely helped human ancestors make the most out of rotting, fermented fruit that fell onto the forest floor, the researchers said. Therefore, knowing when this ability developed could help researchers figure out when these human ancestors began moving to life on the ground, as opposed to mostly in trees, as earlier human ancestors had lived.

"A lot of aspects about the modern human condition — everything from back pain to ingesting too much salt, sugar and fat — goes back to our evolutionary history," said lead study author Matthew Carrigan, a paleogeneticist at Santa Fe College in Gainesville, Florida. "We wanted to understand more about the modern human condition with regards to ethanol," he said, referring to the kind of alcohol found in rotting fruit and that's also used in liquor and fuel.

To learn more about how human ancestors evolved the ability to break down alcohol, scientists focused on the genes that code for a group of digestive enzymes called the ADH4 family. ADH4 enzymes are found in the stomach, throat and tongue of primates, and are the first alcohol-metabolizing enzymes to encounter ethanol after it is imbibed.

The researchers investigated the ADH4 genes from 28 different mammals, including 17 primates. They collected the sequences of these genes from either genetic databanks or well-preserved tissue samples. [Holiday Drinking: How 8 Common Medications Interact with Alcohol]

The scientists looked at the family trees of these 28 species, to investigate how closely related they were and find out when their ancestors diverged. In total, they explored nearly 70 million years of primate evolution. The scientists then used this knowledge to investigate how the ADH4 genes evolved over time and what the ADH4 genes of their ancestors might have been like.

Then, Carrigan and his colleagues took the genes for ADH4 from these 28 species, as well as the ancestral genes they modeled, and plugged them into bacteria, which read the genes and manufactured the ADH4 enzymes. Next, they tested how well those enzymes broke down ethanol and other alcohols.

This method of using bacteria to read ancestral genes is "a new way to observe changes that happened a long time ago that didn't fossilize into bones," Carrigan said.

The results suggested there was a single genetic mutation 10 million years ago that endowed human ancestors with an enhanced ability to break down ethanol. "I remember seeing this huge difference in effects with this mutation and being really surprised," Carrigan said.

The scientists noted that the timing of this mutation coincided with a shift to a terrestrial lifestyle. The ability to consume ethanol may have helped human ancestors dine on rotting, fermenting fruit that fell on the forest floor when other food was scarce.

"I suspect ethanol was a second-choice item," Carrigan said. "If the ancestors of humans, chimps and gorillas had a choice between rotten and normal fruit, they would go for the normal fruit. Just because they were adapted to be able to ingest it doesn't mean ethanol was their first choice, nor that they were perfectly adapted to metabolize it. They might have benefited from small quantities, but not to excessive consumption."

In people today, drinking in moderation can have benefits, but drinking in excess can definitely cause health problems, experts agree. Scientists have suggested that problems people have with drinking, such as heart disease, liver disease, and mental health problems, result because humans have not evolved genes to sufficiently process ethanol. Similarly, humans have not evolved genes to handle large amounts of sugar, fat and salt, which, in turn, have given way to obesity, diabetes, high blood pressure and many other health problems.

One model for the evolution of alcohol consumption suggests that ethanol only entered the human diet after people began to store extra food, potentially after the advent of agriculture, and that humans subsequently developed ways to intentionally direct the fermentation of food about 9,000 years ago. Therefore, the theory goes, alcoholism as a disease resulted because the human genome has not had enough time to fully adapt to alcohol.

Another model suggests that human ancestors began consuming alcohol as early as 80 million years ago, when early primates occasionally ate rotting fermented fruit rich in ethanol. This model suggests that the attraction to alcohol started becoming a problem once modern humans began intentionally fermenting food because it generated far more ethanol than was normally found in nature. The new findings support this model.

In the future, Carrigan and his colleagues want to investigate what the ethanol content of fallen fruit might be, and find out whether apes, such as chimpanzees or gorillas, are willing to consume fermented fruit with varying levels of ethanol.

"We also want to look at other enzymes involved in alcohol metabolism, to see if they're co-evolving with ADH4 at the same time," Carrigan said.

The scientists detailed their findings online today (Dec. 1) in the journal Proceedings of the National Academy of Sciences.