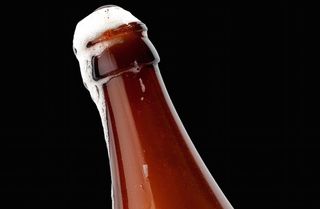 The science of a bar prank that causes beer bottles to overflow with foam could help explain lethal eruptions of gases, researchers say.

A better understanding of this effect could also help researchers to model what could happen if carbon dioxide is accidentally released from containment systems that are designed to keep the global-warming gas from escaping into the atmosphere, scientists added.

The prank known as "beer tapping" involves hitting the top of a newly opened beer bottle. Within seconds, the brew within the bottle foams up and then spills out, creating a sudsy mess.

"I was with some colleagues in my department having some beers in a bar after work. One of us did the trick, and we started to figure out possible explanations," said lead study author Javier Rodríguez-Rodríguez, a fluid mechanician at Carlos III University of Madrid in Spain. [Raise Your Glass: 10 Intoxicating Beer Facts]

In experiments, the researchers tapped the tops of beer bottles and used high-speed cameras to analyze what occurred inside. The scientists also fired laser pulses into the beer — any bubbles that resulted from the beer tapping began forming where the laser pulses were focused, making it easier for the investigators to record what happened afterward.

The scientists found that a sudden impact creates waves of compression and expansion that move back and forth inside the beer from the point of impact. These waves cause bubbles to appear and quickly collapse.

But then, these big "mother bubbles" can act like seeds, the researchers said. The breakup of these larger bubbles can generate cascades of very small "daughter bubbles" that grow much faster than mother bubbles. These clouds of rapidly expanding daughter bubbles lead to explosions of foam that rush upward in a shape resembling a nuclear mushroom cloud.

"These plumes take about a second to become on the order of the size of the bottle, and thus to cause the overflow," Rodríguez-Rodríguez told Live Science.

The investigators suggested these findings could help model the behavior of explosive volcanic eruptions.

The research could also help explain natural disasters called limnic eruptions, the researchers said. In these rare events, dissolved carbon dioxide suddenly erupts from deep-lake water, suffocating wildlife, livestock and people. In 1986, a limnic eruption at Lake Nyos in Cameroon is believed to have released as much as about 31 billion cubic feet (90 million cubic meters) of toxic gas, killing about 1,700 people and 3,000 cattle.

"A better understanding of the physics behind limnic eruptions could be of interest to quantify when they could happen and, more importantly, how much carbon dioxide can be released," Rodríguez-Rodríguez said. "Currently, due to the lack of experimental evidence — only a few serious eruptions have occurred — there are many open questions."

The researchers also said this work could help simulate accidental releases of carbon dioxide from carbon sequestration wells, where large amounts of the greenhouse gas are dissolved in water and pumped into deep aquifers.

"There are situations where carbon dioxide can escape from these reservoirs," Rodríguez-Rodríguez said. "That could lead to dangerous explosive releases of carbon dioxide."

"Although we started to look at this problem just out of scientific curiosity, we have learned things that could be useful for important applications, like carbon dioxide sequestration," Rodríguez-Rodríguez said. "I think that nowadays we tend to value research by the immediate application, not by how much we learn by doing it."

The scientists detailed their findings online Nov. 20 in the journal Physical Review Letters.