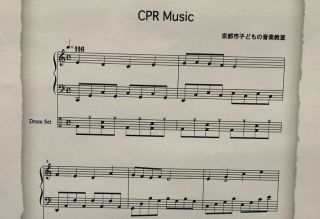 CHICAGO — The familiar tune of the Bee Gees song "Stayin' Alive" has been used for medical training for quite a few years now: It has the right beat — not to mention, the perfect title — for providing CPR's chest compressions at the right pace to revive a patient.

The 1977 hit song has a rhythm of 103 beats per minute (bpm), which is close to the recommended rate of at least 100 chest compressions per 60 seconds that should be delivered during CPR. Plus, the song is well known enough to be useful in teaching the general public to effectively perform the lifesaving maneuver.

In fact, the American Heart Association (AHA) officially recommends that if you see someone collapse, you should "call 9-1-1 and push hard and fast in the center of the chest to the beat of the classic disco song "Stayin' Alive." The AHA has gone as far as depicting the act in an educational music video featuring comedian and physician Ken Jeong.

But although the song seems to be the perfect soundtrack for CPR, it does have some drawbacks. Namely, it is an American song, so not everyone around the world is familiar with it. However, there are other songs with the right beat that might do just as well, according to researchers in Japan.

In a new study, Dr. Yoshihiro Yamahata, of Kyoto Prefectural University of Medicine, and his colleagues tried using new songs to instruct a group of newly hired nurses to perform CPR. The researchers presented their findings this week at the AHA meeting in Chicago.

"The quality of CPR is the key to [helping] the victim recover," Yamahata said. "Our solution to master adequate CPR skills is to put the educational words on several famous songs with 112 bpm and 8 beats" per measure, he said.

Receiving high-quality CPR can double, or even triple, a person's chance of surviving cardiac arrest outside the hospital, according to the AHA. For effective CPR, the AHA recommends delivering at least 100 chest compressions per minute, making each compression at least 2 inches (5 centimeters) deep and ensuring full "recoil," meaning the chest wall returns to its original position between each compression.

Any song would do?

The researchers used two music tracks in the study. One was The Beatles' "Ob-La-Di, Ob-La-Da," which is famous in Japan as well as in the U.S. and elsewhere, Yamahata said. But the researchers replaced the original lyrics with educational words.

The other track was an entirely new song composed by children, which the researchers called "New Melody."

"With the new melody, I tried to reveal the power of music itself, [by not using a] specific famous melody," Yamahata told Live Science.

For the study, 74 nurses were divided into several groups. Nurses in two of the groups were taught to perform CPR to the beat of either the "New Melody" or "Ob-La-Di, Ob-La-Da," and then were tested without any music. Nurses in a third group learned CPR with "New Melody," and were tested with the music on. Another group learned to do CPR without music, instead using a device that provides verbal feedback on the efficacy of chest compressions. This group was later tested without the device.

The nurses were tested on how well they delivered CPR at the correct rate, as well as whether they delivered the chest compressions deep enough and with full recoil.

Sophisticated resuscitation techniques have continued to improve, but CPR — the simplest resuscitation method — remains underused. As a results, in the United States, the chance of a person surviving cardiac arrest that occurs outside the hospital is 10 percent, according to the AHA.

Receiving CPR from a bystander before medical personnel arrive can dramatically increase a person's odds of surviving, and the recent modifications to CPR — which now recommend only chest compressions without giving mouth-to-mouth — may make it easier for people to learn the method, according to the AHA.

The power that music has to help people memorize tasks has long been noted, in many settings other than just CPR. Yamahata said he experienced this firsthand when instructing a music class for school children and experimenting with adding educational words on famous animation songs.

"Even school children could memorize the contents, such as the number of chest compressions and ventilation, with our song," Yamahata said.

"I think music can be a great help to provide the good quality of CPR even by the general public," he said.