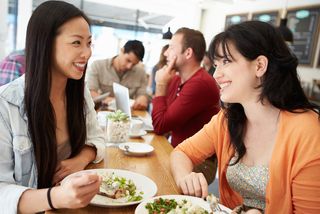 NEW ORLEANS — A new website ranks popular restaurant chains in the United States based on the healthiness of their food, and aims to make it easier for people to find healthy options when they eat out.

The website, called Grellin, uses nutrition information from meals at 100 of the nation's restaurant chains, and ranks the restaurants based on the proportion of their meals that qualify as "healthy." The researchers call this percentage the "Grellin grade."

Some of the restaurants that ranked as the healthiest include Au Bon Pain, Rubio's and Subway, which had more than 50 percent of their menu items meet the criteria for healthiness.

Dr. Lenard Lesser, of the Palo Alto Medical Foundation Research Institute, said the website was inspired by restaurant inspection grades, which people may use to determine if they want to eat at a certain restaurant.

"We hope that people tend to go towards restaurants that have a higher percentage of their menu that is healthy," and that restaurants with more healthy items get more customers, Lesser told Live Science. The website was announced today (Nov. 19) here at the annual meeting of the American Public Health Association.

To rank the restaurants, the researchers turned to a database called MenuStat to collect published nutrition information on menu items.

Then, the researchers gave food items a nutrition score out of 100, based on their nutrient content and the percentage of fruits, nuts and vegetables that the item had. Menu items that scored above 64 on nutrient content, and had fewer than 700 calories, were considered healthy.

The researchers created an algorithm to score menu items, but some items did not have enough information in the database to be scored, so the researchers turned to crowdsourcing. Participants underwent a brief training to learn how much fruit, vegetables and nuts were in certain foods, and then rated the fruit, vegetable and nut content of menu items, Lesser said.  [Lose Weight Smartly: 7 Little-Known Tricks That Shave Pounds]

Here are the 10 healthiest restaurant chains (with their scores), according to the site:

The Grellin website not only lets people see which restaurants are ranked as the healthiest, but also lets consumers view which menu items are healthy at any given restaurant. The website also gives each menu item a "run score," which corresponds to how many hours someone would have to run to burn off the calories in that food, Lesser said.

Some restaurants did not provide enough information to receive a Grellin grade, and these restaurants are marked on the website with a dash, in no particular order.