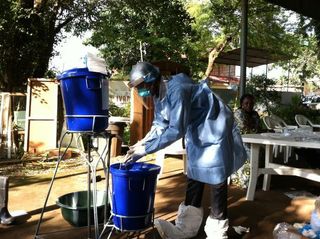 A student in Sierra Leone at an infection control workshop led by the U.S. Centers for Disease Control and Prevention.
(Image: © Daniel Martin | CDC)

No cases of Ebola remain in the United States at the moment, but researchers are busy working on vaccines as the virus continues to spread in West Africa. In a few areas in Liberia, cases may be on the decline, new reports find.

Researchers working on a vaccine against the Zaire strain of Ebola virus, which is causing the current outbreak, say that nearly 200 people have now received an experimental vaccine that was developed by the U.S. National Institutes of Health (NIH) and GlaxoSmithKline. The trial is a Phase I trial, meaning its goal is to test the vaccine's safety (as opposed to looking at how effectively it may work).

The trial's participants include people in the United States, Mali, Switzerland and England, the researchers said in a statement on Monday (Nov. 17). So far, data is showing promising results, indicating that the vaccine will likely move into a Phase II trial, they said, which would continue to evaluate the vaccine's safety as well as look at its effectiveness. [2014 Ebola Outbreak: Full Coverage of the Viral Epidemic]

The vaccine contains a cold virus that infects chimpanzees, along with a single gene from the Ebola virus, which the researchers hope will prompt the body to develop an immune response to Ebola. It does not contain infectious material, and people cannot catch Ebola from the vaccine, experts said.

The researchers want to look at how the immune response of the Malian health care workers in the trial compares with that of people in England and Switzerland, by the end of this year.

"If this vaccine is proven to work, it could help alter the dynamic of this epidemic by interrupting transmission to the health care workers who are most at risk," Dr. Myron Levine, director of the Center for Vaccine Development at the University of Maryland School of Medicine, said in the statement.

Another Ebola vaccine, developed by NewLink Genetics, is also being tested in a human clinical trial. Doctors are monitoring the immune systems of about 40 people to see how they react to an Ebola protein in the vaccine, the company said in a statement.

Other treatments, including plasma from people who have recovered from Ebola, and the experimental drug ZMapp, are slated for testing by the end of 2014, the World Health Organization (WHO) said in a recent report.

"We don't know if the vaccines are going to work, and how well, and what the side effects will be, but we will get some information as we get into the New Year," said Dr. William Schaffner, an infectious-disease specialist at Vanderbilt Medical Center in Nashville, Tennessee, who is not involved with the trials.

As for the outbreak itself, the virus continues to spread in Sierra Leone and Guinea, which had 1,166 and 1,187 deaths from Ebola as of Nov. 14, respectively, according to the CDC.

However, cases may be dropping in some areas in Liberia. Reports released last week by the Centers for Disease Control and Prevention (CDC) suggested the number of new Ebola cases is now declining in two of Liberia's 15 counties.

For example, in Lofa County, where Liberia's outbreak began, Ebola cases decreased from a peak of 153 new cases a week in August, to four new cases during the week that ended Nov. 1, a CDC report found.

An increase in Ebola treatment units, safe burials and public education may have helped stem the virus' spread in these counties, researchers said.

People in these areas are still coming down with the disease, and the virus is also spreading to rural areas in Liberia, which are hard for medical personnel to reach. In the past few weeks, doctors have reported one new cluster of cases per day in these regions, the CDC said.

Still, the declines in the two Liberian counties suggest that medical and humanitarian help are slowing the epidemic, officials said.

"The recent decrease in cases suggested by these reports shows how important it is to continue to intensify our Ebola response," CDC Director Dr. Tom Frieden said in a statement. "We have to keep our guard up. In Guinea, cases have increased and decreased in waves; we can’t stop until we stop the last chain of transmission."

In Mali, 28 health care workers are now under observation after they had contact with a patient who died of Ebola at their hospital.

This is Mali's second wave of Ebola. On Oct. 24, a 2-year-old girl who had come to Mali from Guinea died of the disease. In a separate case at about the same time, an ill 70-year-old man traveled from Guinea to Mali's capital Bamako to receive treatment, the WHO reported.

The man had acute kidney failure, a complication common in late-stage Ebola virus, but the clinic did not test him for the disease. He died on Oct. 27, according to the WHO.

A nurse who had cared for the man died of Ebola virus on Nov. 11, and several of his family members have also tested positive for Ebola, and some have died.

"The Malians previously, with CDC guidance, jumped on the previous introductions and prevented spread," Schaffner said. "They'll have to do this again this time, and if they do it right, they ought to be able to limit spread. It's all very important because the last thing the people in Mali want is for Ebola to be established in their country."