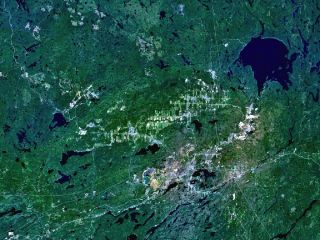 The origins of a massive 1.8 billion-year-old crater in Canada has been revealed

The Sudbury Basin, which is the world's second-largest impact crater, was likely formed by an enormous comet that battered Earth more than 1.8 billion years ago, new research suggests.

The findings settle a long-standing mystery about how the giant hole in the Earth formed. [Crash! 10 Biggest Impact Craters On Earth]

Hole in the Earth

The Sudbury Basin is a roughly elliptical crater that measures about 37 miles by 18 miles (60 kilometers by 30 kilometers), located on the outskirts of Sudbury, Ontario, in Canada. Ever since miners discovered rich deposits of copper, nickel, palladium and other valuable metals there in the 1880s, scientists have wondered how the giant hole in the Earth came into existence, said study co-author Joseph Petrus, an earth sciences doctoral candidate at Laurentian University in Sudbury.

Scientists knew an impact caused the crater because of characteristic "shock features," such as rock fragments cemented together and shatter cones, or a conical, repeating structure of striations in the rock.

By the 1960s and 1970s, geologists had dated rocks from the crater and determined that the impact was very old, between 1.6 billion and 1.9 billion years old. More recent dating, based on the age of zircon that crystallized in the impact melt, estimated that the impact occurred 1,849.5 million years ago, according to a 2008 article published in the journal Geology.

But despite hundreds of research papers on the basin, no one knew exactly what type of impact formed the massive geologic feature.

To answer that question, Petrus and his colleagues took a second look at the chemistry of the rocks from the massive crater. Because the Earth pulls siderophile, or iron-loving, elements such as iridium or gold inward to its core, the planet's crust contains relatively low concentrations of these molecules.

Meanwhile, space debris contains more siderophile elements than the Earth's crust, and space rocks such as asteroids typically contain more of these elements than do comets, which are known as the "dirty snowballs" of the solar system. (Comets are thought of as the cosmic leftovers of a mix of ice, gas and rocky dust from the solar system's formation 4.6 billion years ago, whereas asteroids are rocky bodies that circle the sun but are too small to be considered planets.)

By studying the concentration and distribution of iron-loving elements in the impact-shattered rocks, in addition to the size of the area where the impact melted the rock, Petrus and his colleagues identified the type of impact that formed the crater.

A comet filled with rocky asteroid bits, as opposed to an asteroid, formed the crater, the team concluded. The massive comet blasted into the shallow oceans near the continental margins of a primeval supercontinent, known as Nuna, nearly 1.9 billion years ago. The supercharged collision sent debris flying, with rock fragments from the impact reaching as far as present-day Minnesota.

The impact left a gigantic crater with a complex shape measuring about 93 miles (150 km) across, which over the eons gradually eroded to its current size and shape. At the time, all life forms on Earth were single-celled, primitive organisms, Petrus said.

Scientists still don't know much about the composition of comets, but the current Rosetta mission that landed an exploratory probe on the comet 67P/Churyumov–Gerasimenko could shed more light on the subject, he added.

"The Rosetta mission that has been in the news lately will hopefully provide unprecedented information about the structure and chemistry of comets, so we are waiting anxiously for their results," Petrus said.

The new findings were detailed online in November in the journal Terra Nova.

Editor's Note: This story was updated to note that gold was not one of the ore deposits miners found at the Sudbury Basin.