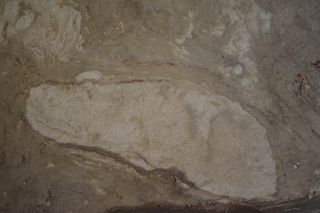 When a pair of fishermen waded into the frigid waters of the southern Baltic Sea about 5,000 years ago, they probably didn't realize that the shifting seabed beneath their feet was recording their every move. But it was.

The long-lost evidence of that prehistoric fishing trip — two sets of human footprints and some Stone Age fishing gear — was recently discovered in a dried up fjord, or inlet, on the island of Lolland in Denmark. There, archaeologists uncovered the prints alongside a so-called fishing fence, a tool that dates back to around 3,000 B.C.

Archaeologists have found fishing fences before, but the footprints are the first of their kind discovered in Denmark, according to Terje Stafseth, an archaeologist with the Museum Lolland-Falster, who helped excavate the ancient prints. [See photos of the Stone Age human footprints]

"This is really quite extraordinary, finding footprints from humans," Stafseth said in a statement. "Normally, what we find is their rubbish in the form of tools and pottery, but here, we suddenly have a completely different type of trace from the past, footprints left by a human being."

For more than a year, Stafseth and his colleagues have been racing against the clock to collect artifacts and other historical objects from Denmark's past before they disappear forever. In the next year or so, construction is slated to begin on the Fehmarn Belt Fixed Link, an underwater tunnel that will connect Lolland with the German island of Fehmarn. The tunnel will be built with several above-ground facilities that will cover up dried fjords, including the one where the footprints and fishing equipment were found, according to Lars Ewald Jensen, the Museum Lolland-Falster's project manager for the Fehmarn Link project.

Those dried up inlets, as well as other areas of Lolland, are a good place to look for artifacts because these areas weren't always dry, Jensen told Live Science. In fact, the fjords used to be the backdrop for Stone Age people's daily water activities, such as fishing and offering sacrifices to the sea, he said.

But in 1872, the Baltic Sea flooded, killing 80 people on the island of Lolland alone, Jensen said. To protect against future storm surges, a dyke was completed in 1877 that spans about 37 miles (60 kilometers) of Lolland's southern coast. The project left the fjords dry.

The Stone Age footprints were likely formed sometime between 5,000 B.C. and 2,000 B.C., Jensen said. At that time, the water level of the Baltic Sea was rising due to melting glaciers in northern Europe. Also at that time, prehistoric people were using these inlets as fishing grounds.

These individuals constructed elaborate traps, called fishing fences, to catch their prey. The wooden fences were built in sections several feet wide — thin switches of hazel suspended between two larger sticks — and the sections were lined up consecutively to form one long, continuous trap. The trap was placed in the shallow water of the fjord, which would be flooded with the incoming tide, the archaeologists said. When the fishermen wanted to move their gear, they would pluck the sections of the fence from the claylike floor of the fjord and move the whole apparatus to a new location. [Top 10 Mysteries of the First Humans]

"What seems to have happened was that at some point they were moving out to the [fish fence], perhaps to recover it before a storm," Jensen said. "At one of the posts, there are footprints on each side of the post, where someone had been trying to remove it from the sea bottom."

The footprints around the post, as well as several others in the general area, were likely preserved in time thanks to the stormy weather. As the fishermen struggled to move their gear, their feet sunk deeper into the floor of the fjord and were covered by sand stirred up by the incoming ocean surge. The recovered footprints feature fine layers of mud and sand, neatly positioned one atop the other, Jensen said.

The archaeologists said the footprints must have been made by two different people, since one set of prints is significantly smaller than the other. Jensen and his team are now making imprints, or flat molds, of the footprints to preserve these ancient signs of life.

In addition to the human tracks, the team uncovered several skulls belonging to domestic and wild animals on the beach near the fjord. The researchers said the skulls were likely part of offerings made by local farmers, who inhabited the region from around 4,000 B.C.

"They put fragments of skulls from different kinds of animals [on the sea floor], and then around that they put craniums from cows and sheep," Jensen said. "At the outermost of this area, they put shafts from axes. All in all, it covers about 70 square meters [83 square yards]. It's rather peculiar."