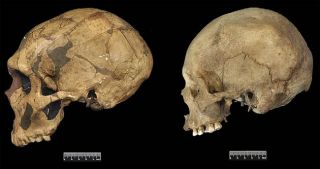 Neanderthal and modern human cranial differences. On the left is a Neanderthal from France (cast of La Ferrassie 1) and on the right is a recent modern human from Polynesia.

The first modern humans had something Neanderthals didn't. About 30,000 years ago, our Neanderthal neighbors died off while we survived. Scientists are unsure what gave us an edge, but new research could help narrow down the possibilities.

A team of anthropologists has compared measurements of Neanderthal skulls to modern human skulls, and argues that most variations among them are the result of random changes that occur over time, and not of adaptations driven by natural selection.

"We're actually saying that the differences between modern humans' skulls and Neanderthals' are not due to changes that increased people's ability to survive and reproduce," said researcher Tim Weaver, an anthropologist at the University of California, Davis. "Whatever advantages humans had over Neanderthals didn’t have to do with the size and shape of the cranium."

In other words, modern humans don't seem to have developed skeletal adaptations that gave them better eyesight, hearing or smell than Neanderthals.

The skull analysis allowed the researchers to calculate that Neanderthals and modern humans last shared a common ancestor about 370,000 years ago.

Weaver and his colleagues calculated the date using a model that assumed none of the differences in skull shape affected survival and reproduction. Their system attributed any variations to chance mutations, not functional adaptations. The fact that their findings agree with the previous calculation based on DNA-dating supports the researchers' assumption, Weaver said.

"It was a check to see if this model was correct," Weaver told LiveScience. "If we had gotten a different estimate, then it might mean that the differences were more based on natural selection. We used this as evidence in support of the idea that most of the differences were due to chance and not functional adaptations."

This finding may contradict a common belief that humans won out over Neanderthals because they acquired helpful physical changes in their skulls.

"Most researchers over the past 150 years, since we've known about Neanderthals, have thought that the differences between their skulls and our skulls were due to natural selection," Weaver said. "On the surface it sounds counterintuitive that in a cranium that’s performing all these vital functions, the differences are due to chance."

Erik Trinkaus, an anthropologist at Washington University in St. Louis who did not work on the study, said the research cannot establish absolutely that natural selection did not create skull differences between Neanderthals and modern humans, or even that the divergence date of 370,000 years is accurate, because both dating methods are only looking at chance mutations.

"I think the main thing their paper contributes is it shows that when you look at a series of anatomical characteristics that are likely to be neutral, they paint the same kind of evolutionary picture as molecular genetic data," Trinkaus said.

While this research does not settle the question of what differentiates modern humans and Neanderthals, it may help point scientists toward a better understanding of how modern humans ended up dominating, Weaver said.

"One reason why modern humans might have been able to replace Neanderthals has to do with behavior," Weaver said. "They gained new cultural abilities that allowed them to better exploit their environments and out-compete groups like Neanderthals. Those abilities probably have nothing to do with cranial form. They could be cultural, or they could be changes happening in the structure of the brain. It's unclear which explanation is correct."

Archaeologists have found evidence that big changes occurred in human society around the time Neanderthals disappeared. They've discovered cave paintings, rock art and beads dating from after 50,000 years ago, where before then there was limited evidence of these.

"Art is an indicator of humans' ability to innovate," Weaver said. "Once you have the ability to build on the innovations other people have made, technology changes very rapidly. This would allow humans to be very successful and to spread around the planet."

Some researchers dispute the idea that modern humans had any kind of innate advantage.

Trinkaus says he has not seen evidence of any kind of difference, either biological or social, between humans and Neanderthals.

"When we look at the archaeology, there's essentially no difference in their implied social sophistication," he said. "They use the same kinds of tools, they're all burying their dead, they're all using body decorations of some form or another. They were equally effective at hunting animals. In anything that we can measure, there's very little difference between Neanderthal and modern humans 50,000 to 100,000 years ago."

Trinkaus said the reason modern humans flourished and Neanderthals didn't may have just been luck.

"Somebody once compared it to a football game," he said. "They just happened to win this week. Why, in more recent time periods, do you have some groups of humans with certain cultural advances who displace others? It's happened many times. There's nothing biologically superior about one group versus the other."