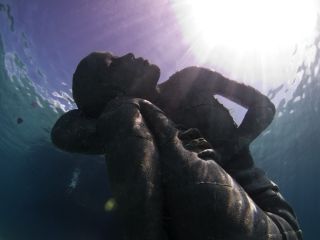 The Ocean Atlas underwater sculpture, an 18-foot (5.4 meters), 60-ton statue deployed off the coast of Nassau in the Bahamas
(Image: © Jason deCaires Taylor)

Just off the coast of the Bahamas, a giant waits beneath the waves.

The nearly 2-story-high statue, dubbed Ocean Atlas, was lowered into place earlier this month and is the largest sculpture ever placed underwater. The statue, which stands 18 feet (5.5 meters) tall and weighs 60 tons, depicts a Bahamian girl holding the weight of the ocean on her shoulders.

Ocean Atlas is inspired by Greek myth of the Titan Atlas, who holds the celestial spheres on his shoulders. The sculpture was designed and built by artist and conservationist Jason deCaires Taylor. While the sheer size of the sculpture is impressive, the statue isn't just a visual treat for passing scuba divers and snorkelers, Taylor said. [See Images of the Giant Underwater Sculpture 'Ocean Atlas']

"I really wanted my work to be functional at the conservational level," Taylor told Live Science. "I realized I could make an artificial reef with these sculptures and they would have a different life," he said, referring to coral creatures that can colonize the sculpture.

The sculpture is intended to show that people, and especially the next generation, "can support our seas and stop them from collapsing," Taylor said.

Ocean Atlas may be the biggest underwater statue, but it isn't the first. In 1954, Guido Galletti's statue of Jesus with his arms up, called "Christ of the Abyss," was placed under the Mediterranean Sea near Genoa, Italy, to commemorate a scuba diver who died there. Two statues from the same mold as the "Christ of the Abyss" also lie off the coasts of Grenada and Key Largo, Florida. A marine park near Cancún, Mexico, harbors 500 statues at three underwater galleries (many of the statues were made by Taylor). And Taylor has designed several other underwater sculpture parks around the Caribbean islands.

Over time, Taylor has consulted several scientists about the most durable materials for the marine environment. He uses special marine-grade cement that is pH neutral (meaning it's not acidic or basic) and very strong; it also doesn't require reinforcing metal, which could corrode underwater.

Assembling such a large structure under the waves is a huge technical challenge. Individual pieces of the sculpture were cast in concrete on land, then lowered in place with a crane, he said. A team of divers maneuvered the pieces together so they locked into place. Now complete, the Ocean Atlas stretches from the seafloor to the surface.

Because the sculptures are intended as artificial reefs, the material used had to mimic real reef environments.

"Most coral reefs are formed on natural rock formations," Taylor said. "You need an object that's extremely solid, and the surface area is textured so the coral polyps can attach and anchor themselves." (Coral polyps first attach to a hard surface, and then form colonies, which pull calcium from the seawater to create their hard homes for their soft bodies.)

The sculpture also has to be placed downstream from natural coral reefs, so that embryonic coral drifting through the water will reach and colonize the structure, Taylor said. Sometimes, Taylor plans to seed the structure with coral to speed the colonization.

When designing any underwater sculpture, he also tries to envision how different animals will occupy its nooks and crannies. Crustaceans tend to occupy the bottom of the sculpture, using it as a base camp for nighttime hunting. They also shelter a little higher up on the lower parts of the sculpture. Schooling fish may hide from big predators in voids within the structure, Taylor said.

The more surfaces and crannies, the better; when his sculptures are placed on a barren stretch of sand, sea life quickly colonizes the structure's many shelters, he said.

"Everything underwater is trying to hide," Taylor said.

For most of the past four years he was living in Mexico near his Cancún sculptures, and would visit almost weekly to document the minute changes on the sculptures.

The underwater environment also provides a viewing experience most landlubbers never experience, he said. "Normally when you visit a sculpture garden you're subject to gravity, but underwater, the laws are very different," Taylor said. "You can appreciate the work from many different angles."