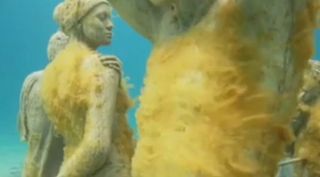 Hundreds of statues of men, women and children were sunk to the bottom of the sea near Cancun and Isla Mujeres in the Gulf of Mexico where they will slowly come to life as algae, coral and fish begin to make these statues their new homes.

His latest project is the development of an underwater museum within the National Marine Park off Cancun and Isla Mujeres. The final and most ambitious of the museum's four stages, nearing completion, is called "The Silent Evolution."

DeCaires Taylor, a Brit, has crafted 400 statues each of them depicting a local villager and has already positioned more than 250 of them on the sea floor, according to the website GrindTV.

The environmentally-friendly reef will become popular among scuba divers and, as a new attraction, it should relieve some pressure from the area's more fragile natural reefs .