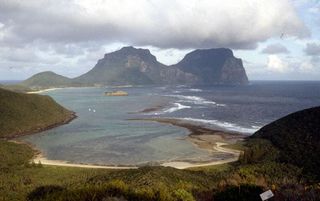 The fossil remains of a massive, ancient coral reef that was about the size of the Grand Canyon have been discovered surrounding an island in the South Pacific Ocean.

The discovery, detailed last month in the journal Geophysical Research Letters, could offer a glimpse into past ocean life.

Another fossil reef, this one at the site of the present-day Great Barrier Reef , was drilled into by scientists recently, who retrieved pieces of the fossil for study.

Coral reefs are made up of colonies of tiny animals that produce, among other products, calcium carbonate to build the reef structure. (Microscopic plants living in their tissues provide the corals with nutrients to stay alive.)

The newly discovered fossil reef around Lord Howe Island appears to have lived, and thrived, between 9,000 and 7,000 years ago.

Because the fossil remains were found in deep waters where coral typically can't survive, the researchers suspect that the reef drowned due to rising sea levels leaving behind the newly discovered fossil structure and a small section of living coral, which was able to stay in shallow water.

The discovery "tells us that things have changed quite a bit in this part of the world," said study researcher Colin Woodroffe, a professor at the University of Wollongong in Australia.

"What we've shown is that in fact when the sea was a little bit lower during the ice melt from the last glaciation there was actually a flourishing reef around Lord Howe Island," Woodroffe told OurAmazingPlanet. "It would have looked a little bit more like Tahiti than the island that we see there today."

The relict reef could serve as a base of sorts for new growth of corals, which are threatened by rising water temperatures and ocean acidity thought to result from climate change .

"It's a fossil reef at present, but there are actually some places where there is still some coral life there [giving] some evidence that coral was able to re-colonize only a couple of thousand of years ago," Woodroffe said.

"The big challenge for them now is that the water has risen and it's in 30 meters [98 feet] of water," he added. Coral reefs typically flourish in shallow water with sea surface temperatures between 64.4 degrees and 96.8 degrees Fahrenheit (18 degrees and 36 degrees Celsius).

Woodroffe and his team discovered the fossil reef during ongoing research of the existing reef surrounding Lord Howe Island. The team hopes to return to further study the fossil reef, and in the meantime, the researchers are working with the Lord Howe Marine Parks Authority to re-zone the area giving the discovered fossil reef higher conservation status.