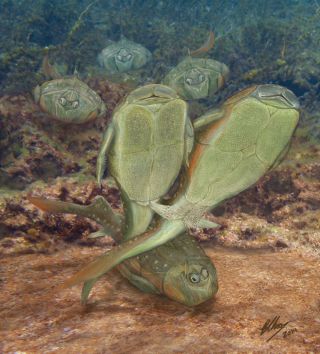 The first sex on Earth looked like square dancing — if fish could square dance, of course.

That is the finding of a new study of 385-million-year-old fossils that reveal that the oldest jawed fish on Earth were the first to reproduce by copulation. Later fish would revert to spawning — releasing eggs and sperm into the water to meet — but some have since re-evolved the ability to have coupled-up sex.

The oldest known sex act took place when tiny fish called Microbrachius hooked their jointed arms side by side and linked bony genital claspers with bony genital plates to transfer sperm from male to female. [See Images of These Ancient Fish and Sex Organs]

"With fossils, we often just get a glimpse of what ancient animals looked like, but rarely do we get an insight into behavior," said study researcher John Long, a paleontologist at Flinders University in Australia. "The first act of copulation was a bit bizarre, but still a very beautiful act."

The origin of sex

As un-erotic as it may seem, fish were the inventors of sex. Long and his colleagues had previously found evidence of internal copulation in placoderms, a group of armor-plated prehistoric fish. In 2008, the researchers reported the astonishing discovery of the oldest fossilized embryo inside a 380-million-year-old placoderm fish.

These newly discovered male and female sex organs in Microbrachius fish date to 385 million years ago. But sex could be far older, said Long, author of "The Dawn of the Deed: The Prehistoric Origins of Sex" (University of Chicago Press, 2012). Microbrachius was part of a group of placoderms called antiarchs; these were the oldest lineage of placoderms, and the first fish to develop jaws. Antiarchs evolved in the early Silurian Period, or about 430 million years ago.

"We knew that some of these advanced groups of placoderms already had invented copulation, so to speak, and could give birth to live young," Long said. Now, it's clear that sex goes back to the most primitive of jawed vertebrates, he added.

At first, while Long was doing research in Estonia, he suspected that Microbrachius might be up to hanky-panky. There, at the Tallinn University of Technology, he discovered an odd fossil: an armored plate belonging to an antiarch placoderm with a "strange tube of bone" attached to it, he said.

He suspected it might be a genital clasper, a male reproductive organ that helps fish stick together while getting busy. But one bone wasn't convincing evidence.

"We hunted far and wide," Long said, eventually finding complete Microbrachius specimens in museum collections in Scotland. The fossils came from ancient freshwater lakebeds in the region. Each fish was about 3 inches (7.6 centimeters) long. Sure enough, males sported L-shaped genital claspers. Females had genital plates where the male claspers could fit.

"For the first time, we could identify sexual dimorphism in this ancient group," Long said.

Placoderms were once thought to be evolutionary dead ends, Long said, but studies in recent years have turned up evidence that they were the original developers of the vertebrate body plan. They were the first animals to develop jaws, teeth, paired hind limbs and even inner ears with three semicircular canals — an anatomy that looks just like what humans have in their heads today. These discoveries suggest that placoderms were the ancestors of modern bony fishes.

Only some bony fish reproduce by copulation today; it appears they lost the ability as a group, only to regain it in some lineages later on, Long said.

Microbrachius' genitals were too odd and large for missionary mating, as some copulating sharks do today. Instead, Long and his colleagues suspect the fish made use of another anatomical oddity: their jointed front limbs, which were more like arms than fins. By hooking these fins together, the fish could have floated side by side in order to maneuver their genitals into place.

"I've been saying they did the mating act sideways, square-dance style, with their little arms linked," Long said.

The researchers reported their findings Oct. 19 in the journal Nature.